RNC: We've Got a Ticket to Pride 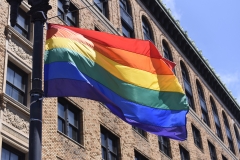 The Left must go to bed most nights thanking its lucky stars for the Republican Party. If it weren't for some misguided GOP leaders, the Democratic Party would probably be well on its way to irrelevance in 2022.

But instead of watching the other side pack its bags for the minority after last Tuesday's drubbing, Republicans have decided to leave the door open a crack -- first by voting for another $1.2 trillion dollars in unnecessary spending and now by throwing out the welcome mat to the one cause (apart from CRT) that's swung parents to the GOP's side: LGBT radicalism.

It's a movie, unfortunately, that conservatives have seen before. Just when the GOP starts to draw a sharp contrast with the Left, moderate Republicans decide to shoot the party in the foot. Until late Friday, Democrats were about to go over the cliff with Rep. Alexandria Ocasio-Cortez (D-N.Y.) leading the parade after a humiliating showing in Virginia, New Jersey, and school board races across the country. But now, thanks to some chronic tone-deafness inside the party, there are some who want to take the baton from AOC.

"The RNC," she said to guests at the Spirit of Lincoln Gala, "is launching our first-ever RNC Pride Coalition." The Log Cabin Republicans, she insisted, "don’t just share our vision for a free, secure and prosperous America — they enrich it by adding unique perspectives to our party and recruiting even more diverse candidates and supporters to join our cause."

Conservatives, who've been working fast and furiously to stop the transgender agenda in public schools, couldn't believe their ears. Right now, most Americans' biggest priority isn't embracing "diversity" -- it's stopping their children from being raped and assaulted in its name. Just recently, in two separate states, girls have been sodomized and groped in their own school bathrooms thanks to the gender extremism the RNC is now signaling support for. In other places, like Fairfax County, moms and dads are frantically trying to get LGBT pornography off of school library shelves and transgender-affirming sex ed out of the classroom. These are the battles they assumed the Republican Party was fighting too. Until now.

A good number of people, myself included, have no problem if people who identify as gay or lesbian want to join the Republican Party. What we object to is RNC leaders hanging a flashing neon sign over the entrance saying, "We support the LGBT cause," because we don't. The GOP platform made that abundantly clear in 2016 and again in 2020. And if prominent Republicans who live that lifestyle are saying "we're not going to make sexual orientation be the be-all, end-all, center of everything that we do," then what exactly is the point of this PR campaign? Certainly not to endear the RNC to parents, the GOP's greatest new ally, or longtime conservatives, who've been fighting for decades to keep this extremism at bay.

If the goal is winning elections, then how does this new outreach appeal to a broader swath of voters? As McDaniel herself should have learned this past summer, this isn't a movement that's interested in meeting conservatives halfway. These are hard-core activists who are demanding forced acceptance everywhere from elementary classrooms to corporate board rooms and anything in between. And that's not going to change no matter how many rainbows the Republican Party flies.

And yet the RNC keeps trying to walk the LGBT tightrope. In June, McDaniel posted a tweet that managed to upset both sides when she wished everyone a happy Pride Month.

"The GOP is proud to have doubled our LGBTQ support over the last four years," she tweeted, "and we will continue to grow our big tent by supporting measures that promote fairness and balance protections for LGBTQ Americans and those with deeply-held religious beliefs." And what was the reaction from the LGBT crowd? Not "wow, thanks for recognizing us," but "why don't you revisit your party's platform before you open your mouth about pride."

Out in the real world, most Americans -- including a good number of Democrats -- are tired of being force-fed radicalism that denies reality on everything from Twix bars to Chipotle burritos. They're not sitting at home thinking of ways to partner with a movement that's robbed us of girls' sports, children's privacy, religious freedom, and free speech. They're not sprinting to Twitter to applaud a cause that's suspending teachers, rewriting the English language, and advancing its agenda on the backs of mutilated teenagers' bodies. What they are doing is writing to their local legislators, calling state senators, and voting to stop this radicalism from infecting more schools, businesses, and competition.

At the end of the day, the Republican Party should welcome everyone who supports its policies, but not at the expense of core values. For years, we've watched the other side undermine our most basic principles, chipping away at the foundations of our nation in the name of "equality." For the sake of America, our message must continue to be that principles like religious freedom are not only non-negotiable -- they're flat-out incompatible with the pillars of the LGBT movement.

Obviously, there are Republican leaders, many of whom I know and respect, who haven't made their sexuality a defining issue. But the sad reality is, they can't help but open the door for others who will. History shows that statements like this -- even innocent ones -- have laid the groundwork for sweeping change. And while people at the Log Cabin Republicans or RNC may not have that intention, it will almost certainly be the outcome if more conservatives don't stand up and remind Republican leaders that we already have one Democratic Party. We don't need two.