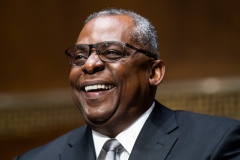 Retired General Lloyd Austin testifies before the Senate Armed Services Committee during his confirmation hearing to be the next Secretary of Defense. (Photo credit: JIM LO SCALZO/POOL/AFP via Getty Images)

There are a lot of threats in the world, but there is only one this president appears to care about combating -- conservatives. In yet another sign that America is doomed to a term of unprecedented extremism, the Biden administration just released its training materials for its "one-day military stand down" to weed out dangerous views. But what constitutes as dangerous? Good question, leaders say -- and not one they have an answer to.

If there's one thing the Jan. 6 riots have given the Left, it's an excuse to flush out conservatives from just about every possible angle. The latest comes from the Defense Department, where new Secretary Lloyd Austin is putting the finishing touches on a training session aimed at "rooting out" radicals in the ranks. But as time goes by, Politico points out, there's a "growing sense of anxiety within the Pentagon that this push could feed the perception that it is policing political thought, favoring one political party over another or muzzling free speech." And a quick scan through the official talking points shows they have plenty of cause for concern.

"As you heard in the secretary's video remarks," the document begins, "extremist ideologies, particularly those that undermine the oath we each took to support and defend the Constitution of the United States against all enemies, foreign and domestic, have no place within the Department of Defense. Actively espousing ideologies that encourage discrimination, hate, and harassment against others will not be tolerated within our [unit]."

Then, taking a page out of Barack Obama's second term, the DOD goes on to talk about the dangers of "hate groups," explaining that the military has "a compelling interest in preventing [their] advent and spread...." Of course, way back in 2013, the Left's definition of "hate groups" included mainstream faith-based groups like FRC and American Family Association. Now, eight years and a Capitol riot later, it's only logical to assume their definition is even broader -- including every Bible-believing Christian and conservative.

As military attorney Roger Maxwell warned on "Washington Watch," "the line is just not clear at all." Unfortunately, the motives are -- to drive conservative and Christian members of the military either underground or out of the service altogether.

Even Politico acknowledges that there's no consensus across the military on how to define extremism. Does it mean belonging to a racist group or holding certain values and views? The reality is, the military already does a good job smoking out people associated with the KKK or other white supremacist groups. So the only thing this training accomplishes is to open the door to an even broader, more sinister interpretation that targets social conservatives.

That much is obvious from the New York Times' own webpage, where the paper's magazine is actually soliciting stories from troops and veterans -- not just of extremism in the military, but of "far-right extremism," specifically.

"For friends and relatives of veterans," the paper insists, "and for most people with a Facebook account, the radicalization of a sizable fraction of veterans, and the embrace by veterans of conspiracy theories, is hardly news...extremists and bigots in uniform have long been outing themselves on social media with supportive references to conspiracy theories and the posting of neo-Nazi symbols and coded and not-so-coded references to hate....For this reason, The New York Times invites you to share your stories or tips about extremism in the armed forces."

As if the New York Times snitch line isn't bad enough, some branches are taking the DOD's mandate as an excuse to silence speech. In the Navy, Chief of Naval Personnel Vice Adm. John Nowell Jr. has already warned sailors that "just by posting, retweeting, or liking an offensive post on social media -- you could be participating in extremism. You may not personally know any shipmates with extremist beliefs," Nowell said. "But I assure you that those forces of darkness are among us."

The tentacles of religious hostility run deep in this administration. Anyone who doesn't embrace the Left's "new morality" will be a target, including the men and women fighting for the freedom they want to deny us.