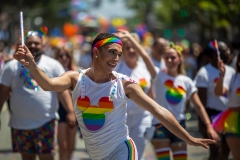 Disney has created some iconic villains over the years, but they've crossed the line with their latest: Texas.

In news no one can believe, the company synonymous with children has decided to pick a fight with a state protecting them. The announcement, which came in late March, is just the latest stop on CEO Bob Chapek's apology tour after he failed to defend transgenderism in Florida soon enough for the radical mob's liking. Now, after two weeks of penance that's included everything from multi-million dollar LGBT donations to the formation of a gay and transgender task force, Disney is the closest its ever been to a final break with American parents -- and reality.

The Bob Chapek who said corporate statements on politics are "counterproductive" is a changed man from early March. Now, after being brought to heel by the radical fringe that holds Disney hostage, the company's woke agenda is overshadowing everything else.

"We know the moment requires urgency, and words are not enough," Chapek told Disney employees at a virtual townhall. But this latest step, vowing "action" against Texas Republicans who want to stop children from mutilating their bodies or taking life-altering drugs, is such a political escalation that even conservatives didn't see coming.

"When I read the article," Texas Attorney General Ken Paxton (R) said, he wondered what possible "action" Chapek could possibly mean. "What is Disney going to do in Texas?" he asked on "Washington Watch." "We're following our state law. Unless they want to come in and un-elect our legislature...as powerful as they may be, I don't think they have the ability to change state law in Texas -- not that I know of." He, like most people, is stunned the company is even trying. "It's shocking to me. We're talking about children [pressing pause] on an irrevocable decision" that could haunt them the rest of their life.

Meanwhile, inside Disney, there's a growing outrage over the company's far-left agenda. In a kingdom of 203,000 employees, the less than 100 who staged a walkout over transgenderism may have grabbed national headlines, but they're a fraction of the men and women who are quietly seething over the combative activism that's violating their values. In an open letter, members of the Disney team blast Chapek for making it "an increasingly uncomfortable place to work" for anyone whose "political and religious beliefs are not explicitly progressive."

"Over the last few weeks, we have watched as our leadership has expressed their condemnation for laws and policies we support. We have watched as our colleagues, convinced that no one in the company could possibly disagree with them, grow increasingly aggressive in their demands. They insist that [Disney] take a strong stance on -- not only this issue -- but other legislation and openly advocate for the punishment of employees who disagree with them....

"Employees who want [Disney] to make left-wing political statements are encouraged, while those of us who want the company to remain neutral can say so only in a whisper out of fear of professional retaliation. The company we love seems to think we don't exist or don't belong here....Furthermore, as this politicization makes its way into our content and public messaging, our more conservative customers will feel similarly unwanted. You can only preach at or vilify your audience for so long before they decide to spend their money elsewhere."

In some corners, that movement has already begun. Ben Shapiro, furious at the company for catering to its wokest base, declared, "It's time for the market pushback to begin." "If you want entertainment that is going to cater to your children, we're going to start making kids content over here at Daily Wire specifically so that you don't have to [support] companies that hate your guts and cater to people who despise your values."

There was also backlash from a handful of brave Disney stars. Natasha Ward, star of the Disney-owned "Station 19" posted that "Supporting trans freedom does not mean it's OK to violate the rights of biological women." When "other people's truth infringes on fact and places an undue burden, which displaces my rights, we have gone too far," she argued.

Other conservatives are taking a page from the Left -- infiltrating shareholder meetings and confronting Chapek personally. Justin Danhof, director of the Free Enterprise Project, bought a single share of stock at several Fortune 500 companies just for the right to attend meetings and challenge the political status quo. That especially came in handy this week, as Disney hosted investors during one of the most contentious weeks in recent memory.

"To attend a shareholder meeting of a publicly-traded company, you need to own a whopping one share of that company," Danhof explained to Fox News Digital. "So if you're upset at Coca-Cola for an action they've taken, I think it's like $58 these days buys you admission to the shareholder meeting."

Most of Disney's legitimate investors -- the ones who are in it to make money -- aren't in lockstep with the company's politics, Danhof said.

"But the vast majority of activist investors who show up, they're pushing their affinity issues from the LGBTQ community, and they're doing it in very large numbers....But I'm encouraged," he insisted on "Washington Watch." "There are more voices in this fight on the Right than there ever have been." He compares it to the parents' movement in education. "They're taking over school boards. They're recalling terrible members because they want to protect their children....But just know that you can do the same thing in the corporate arena as well -- because corporate America wants to control what your children see [too]. And believe me, they want to corrupt your family and your culture. And so, you can fight in the schools -- but you can also fight at the corporate level."

And judging by their actions, Disney would be the perfect place to start.