Dems Give Thomas an Offer He Can't Recuse 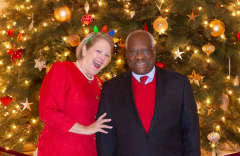 The Left has never needed an excuse to vilify Clarence Thomas. The longtime Supreme Court justice has been a thorn in the side of Democrats' lawless agenda for 30 years. So it's really no surprise that of the thousands of pages of texts submitted to the House's Jan. 6 Committee, his wife's messages to the White House just "happened" to be leaked to the press. Now, in their latest attempt to dispatch their judicial foe, the president's party is arguing that being married to someone with political views should be grounds for impeachment.

To most people watching the spectacle made by the Washington Post and CNN over her exchanges with former White House Chief of Staff Mark Meadows, the motives were obvious: embarrass Ginni Thomas and damage her husband.

"There are text messages that had nothing to do with Jan. 6," Ken Blackwell of my organization, Family Research Council, argued on "Washington Watch." Like a lot of Americans, she was concerned about the integrity of the election and, as a fixture of the conservative movement, wanted to make sure everything was being done to fight the suspected fraud. The two friends texted on and off the next couple of months -- including through the riots, which Ginni insisted "are not representative of our great teams of patriots."

The Wall Street Journal predicted that this was all a plan to de-legitimize Justice Thomas -- and within hours, they were proven right. Squad Democrats Alexandria Ocasio-Cortez (D-NY) and Ilhan Omar (D-MN) wasted no time kicking a smear campaign into gear, whipping up the mob over a possible "conflict of interest."

"Clarence Thomas should resign," AOC tweeted. "If not, his failure to disclose income from right-wing organizations, recuse himself from matters involving his wife, and his vote to block the Jan 6th commission from key information must be investigated and could serve as grounds for impeachment."

Senate Democrats piled on, demanding that Thomas recuse himself from cases involving elections and Jan. 6.

What convenient timing, Blackwell points out. Just as Thomas is set to rule on hot-button issues like gun rights and abortion, the Left has already set to work undermining his conclusions: "This is about having a chilling effect on Clarence Thomas as a justice."

But, as the Journal points out, Ginni Thomas doesn't sit on the court "and there is no reason to believe her personal political views influence the judicial impartiality of Justice Thomas."

Besides, former Thomas clerk Wendy Long insisted, "If holding views about the 2020 election meant a justice couldn't decide legal issues arising from it, then all nine would have to recuse themselves." As for their spouses, they're just as entitled to engage in the political process as anyone. That doesn't change when their better halves are confirmed to the bench.

"If you did a study of all federal judges today to find out whether spouses are involved in politics -- either as political figures of their own or active in some way -- you'd find a plethora," D.C. Circuit Court Judge Laurence Silberman argued.

Even on the Supreme Court, spouses have openly advocated for their pet causes. Justice Potter Stewart's wife famously volunteered at Planned Parenthood, which lawyers in Roe v. Wade openly hoped "was a good omen." In Justice Harry Blackmun's family, the abortion activists also included his three daughters whom he's rumored to have consulted before helping to legalize abortion in 1973. When Blackmun retired, his wife, Sally, made her allegiances public, joining the board of Planned Parenthood of Greater Orlando in 2000. And let's not forget, the Left's beloved Ruth Bader Ginsburg officiated a same-sex wedding herself one month before casting a vote on Obergefell.

"Like so many married couples, we share many of the same ideals, principles, and aspirations for America," Ginni told the Washington Free Beacon in her first interview on the controversy. "But we have our own separate careers, and our own ideas and opinions too. Clarence doesn't discuss his work with me, and I don't involve him in my work...I never much enjoyed reading briefs and judicial opinions anyway and am quite happy to stay out of that lane."

At the end of the day, this is a nothing burger meant to give desperate Democrats a chance to finish what they started three decades ago. At Thomas's confirmation, which was a few handmaidens shy of Brett Kavanaugh's scorched-earth circus, people accused the Left of a high-tech lynching.

"They were attempting it," Blackwell said. "It failed. That's what they're doing now in 2022. It won't work." Why? Because, as Senate Minority Leader Mitch McConnell (R-Ky.) put it, this is "clumsy bullying." "Justice Thomas is an exemplary jurist who has modeled fidelity to the rule of law for more than 30 years... I have total confidence in [his] impartiality in every aspect of the work of the court."

So does the Left -- which is why they've stooped to this scandalmongering. There's nothing Democrats would like more than to eliminate Thomas and replace him with someone more agreeable to their lawless agenda. And if they can't do that, then the next best thing is casting doubt on the court that they can use to fuel their court-packing scheme. But the clock is ticking on this majority, and they know it.