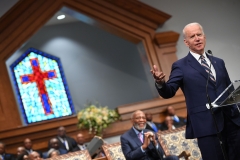 Joe Biden should not go to Communion when he attends Mass. There are several reasons, but the most important is the problem he creates for others by presenting himself for the sacrament while rejecting fundamental teachings of the Church.

When Biden was inaugurated, Archbishop José Gomez, president of the U.S. Conference of Catholic Bishops, wished him well but also pointed to his deep conflicts with the Church.

“Our new president,” Gomez said, “has pledged to pursue certain policies that would advance moral evils and threaten human life and dignity, most seriously in the areas of abortion, contraception, marriage, and gender.”

By promoting these policies, President Biden rejects certain tenets of his faith, disqualifying himself for Communion. Priests and bishops are entrusted to protect the Eucharist. When Biden appears at the altar, he places them in a “no-win” situation by requiring them to either provide Communion to someone not in a state of grace or deny it to him and create a public spectacle.

The Church teaches that as Catholics, “we express our faith in the real presence of Christ under the species of bread and wine,” which means the Communion we receive is not symbolic. The Eucharist is the focus of the Catholic faith, the most important of the sacraments, the object of utmost reverence, and the result of a miraculous occurrence. It is reserved for those who believe and accept the Church's teachings.

The President must be aware that his political advocacy of certain policies puts him in conflict with Catholic doctrine. Archbishop Joseph Naumann explained how in a homily to the National Prayer Vigil for Life a week after Biden took office.

Naumann said Biden is a President who performs a “religiously and ethically incoherent straddle,” in claiming personal opposition to abortion, “while doing everything within his power to promote and institutionalize abortion not only in the USA but also around the world.” The archbishop declared that Biden’s intended “actions…violate the most fundamental of all human rights,” and that Biden is “attempting to confuse people about Catholic teaching by trampling on the sanctity of human life while presenting himself as a devout Catholic.”

Naumann has judged President Biden’s behavior to be inconsistent with a state of grace and explained that “integrity requires a Catholic not receive the Eucharist while acting in a manner incoherent with fundamental Catholic teaching.” The Catechism of the Catholic Church invokes St. Paul on this point: “Whoever, therefore, eats the bread or drinks the cup of the Lord in an unworthy manner will be guilty of profaning the body and blood of the Lord.”

Because God gave us free will, all Catholics must exercise personal responsibility in receiving Communion. In a June 2004 letter, Archbishop William Levada explained that the Church relies on the faithful for a “conscientious self-appraisal” before presenting themselves for Communion and said this practice is of “paramount importance” in protecting the integrity of the sacrament.

When the media report this story, there is the implication that Biden is entitled to receive Communion and the priest or bishop would be wrong to “deny” him what is rightfully his. For example, in a poll out this week, the Pew Research Center asked American Catholics to respond to this question: “Thinking about Biden and his views about abortion, do you think he should be allowed to receive Communion in the Catholic Church?” [emphasis mine]

This question is invalid because it implies the Church is withholding the Eucharist from Biden when, in fact, Biden’s incomplete embrace of his faith is an act of self-disqualification. Given this reality, the Pew question would more accurately be asked as follows: “Thinking about Biden and his views about abortion, do you think he should present himself to receive Communion in the Catholic Church?”

If President Biden were to attend Mass without going to Communion, we could have a much-needed conversation about eternal truth as well as about the nature and limits of authority that would be both theologically and politically beneficial. That’s unlikely, of course, because Joe Biden is a cafeteria Catholic – one who embraces those aspects of the faith with which he agrees and discards others. This mirrors his political life as a cafeteria constitutionalist.

Holy Week is the most meaningful time of the year for Catholics. It is when Jesus gave us the sacrament of the Eucharist. He died for our sins, and He rose from the dead so that we may have eternal life. This is the Church Joe Biden loves but for which he is causing problems. He, and he alone, has the ability and responsibility to correct the situation.

Tom Kilgannon is the President of Freedom Alliance an educational and charitable organization which promotes America’s heritage of freedom and supports those who defend it.