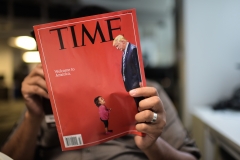 An AFP journalist reads a copy of Time Magazine with a front cover using a combination of pictures showing a crying child taken at the U.S.-Mexico border and a picture of President Donald Trump looking down. (Photo credit: Time Magazine/ERIC BARADAT/AFP via Getty Images)

Time magazine is a pale shadow of its former self, which might explain why it seems to hate the masses. After all, it spent most of 2016 packaging its ugly anti-Trump rants in between nasty anti-Trump covers. Remember the cover where Donald Trump's orange face melted into a puddle — because he was going to lose the election? Hence the ongoing rage.

In the Oct. 19 edition — with a quaint cover image of a menacing cloud of coronavirus being pumped out of some kind of smokestacks on the White House roof — Time promoted an article headlined "Age of Unlogic: The disorienting experience of interviewing voters who can choose their own reality."

Liberal journalists congratulate themselves for being on Team Reality and never seem to care that a big chunk of the public has decided they're egotistical jerks.

The author is Charlotte Alter, daughter of old Newsweek scribe Jonathan Alter, who wrote two books glorifying former President Barack Obama, one hilariously titled "The Center Holds." Charlotte, 30, is a Time "senior correspondent" who demonstrated her affection for the average American voter with this tweet on Sept. 3: "You think voter logic is like: A - B - C - D. IN ACTUALITY, voter logic is more like: A - Purple - Banana - 18."

Let's insert that into the sales pamphlet to get new Time subscriptions. No wonder when you do a Google search for "Time magazine circulation," one of the questions people also ask is "When did Time magazine stop printing?" It hasn't...yet.

In her September squall of tweets, the Time writer vented to her fellow liberals that she had spent three days talking to voters in Kenosha and Racine, Wisc.

"There's this mentality on Twitter that's like 'THIS one huge scandal will sink Trump with THIS group of voters' and I can conclusively report that this is bulls—-," she said.

Some of this frustration came through in the magazine. "Almost nobody seemed to be talking about" the furious headlines that dealt with the "news about Trump reportedly calling fallen soldiers 'losers' and 'suckers;' news about the death toll from COVID-19 passing 200,000; news of Trump's admitting to journalist Bob Woodward on tape that he had intentionally downplayed the virus."

Guess what. People who aren't die-hard Democrats easily sense that this is badly disguised campaign advertising. When they dismiss it, Time says they are guilty of "unlogic," which Alter defines as "reason distorted by suspicion and misinformation, an Orwellian state of mind that arranges itself around convenient fictions rather than established facts."

In this same Time magazine that rages against people who "choose their own reality," they celebrated "Next Generation Leaders" such as transgender activist Munroe Bergdorf. Time ran an op-ed that railed against fakery and misinformation, written by Sacha Baron Cohen, who is infamous for trolling unsuspecting people with fake personalities.

And up front, the magazine promoted Jonathan Alter's choice of an alternate reality where, if the hero of his latest book, Jimmy Carter, had beaten Ronald Reagan in 1980, he might have "bought the planet precious time" against the threat of climate change.

As the campaign concludes, the Trump-loathing media are counting on voter fatigue about the "chaos" generated by President Donald Trump to elect Joe Biden. What they don't seem to realize is that many voters also have significant fatigue from the endless chaos they themselves promote.