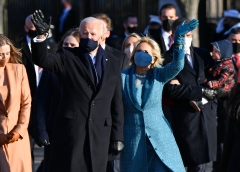 The liberal-Democrat media celebrated Valentine's Day a traditional way: gushy tributes to the new first lady. On Feb. 12, Jill Biden tweeted on her @FLOTUS Twitter account a photo of herself, with a scrunchie in her hair, at a Washington, D.C. bakery picking up "Valentine's treats for the weekend." "Don't tell Joe," she joked.

A Washington Post "PowerPost" headline read, "Scrunchies and dog walking: the country gets a taste of Jill Biden's radical normalcy."

On Twitter, I asked the author of this puffery, Jacqueline Alemany, "What is 'radical normalcy'?" No reply.

Alemany boosted the PR stunt, writing: "Biden's scrunchie that really lit up the Internet. Leave it to a scrunchie to capture the zeitgeist of President Biden's promise to 'return to normalcy,' a stark departure from the 'I don't really care' message sent by Trump."

She'd begun by mocking Melania Trump and the "$51,000 Dolce & Gabbana multicolored floral jacket" she wore in Sicily in 2017.

The most ludicrous line was this: "Jill Biden's laissez-faire approach to her public image and affectionate relationship with her husband may foreshadow a different approach to the traditionally staid and formal office of the first lady."

There is nothing "laissez-faire" in "Dr." Biden's public image. The tweet itself is carefully curated, down to the selection of a black-owned bakery. This is the way the Bidens and the Obamas use social media: to sell themselves as loving and "relatable" people. It's informal poses. It's campaign work. Alemany's article was just more of the sales job.

Alemany turned to her Post colleague Mary Jordan, who authored a negative book on Melania called "The Art of Her Deal": "She'd be unlikely to ever be caught dead in a scrunchie — 'unless it was Chanel,' Jordan joked." Jordan also crowed that "Melania Trump was the most put together person and Jill comes across as a relatable mom, teacher, wife, and woman — she's relatable in a way that Melania never was."

She echoed that with author Kate Anderson Brower: "Dr. Biden has already been out and about in Washington more publicly than her predecessor was in four years," she boasted. "Biden has had decades of experience being herself in public and she's obviously much more comfortable holding her husband's hand and being a demonstrably loving mother and grandmother when the world is watching....I think we need that right now."

Melania Trump began her tenure as first lady behind the eight ball. First, the liberal media always adores first ladies who are Ivy League-educated lawyers or career educators, not just — ick — wives. Second, her beauty was deployed against her: She was seen as "arm candy," a "trophy wife." She resisted any attempt at public affection for the cameras. Comedians mocked their marriage, insisting it was like a prison and that she wanted to claw out of it. She didn't go for magazine cover articles or go "out and about in Washington," for fear of all the poison pens.

The same media outlets who treated the Trumps' marriage as a cynical ongoing negotiation lunged to portray Bill and Hillary Clinton as an inspiring romance, a baby-boomer Belle and the Beast.

The Bidens may be great lovers. But everything at the White House has a large degree of calculation in it. Everyone should know the gushing liberal newspapers and magazines are aggressively engaged in the politics of humanization.