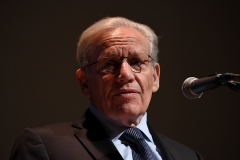 It must be fall campaign season, because our incredibly tilted Democratic media are rotating through a series of authors ripping into President Donald Trump. Start with the most overpraised journalist in Washington, Bob Woodward, who is the same age as Democratic presidential nominee Joe Biden but is still trotted out with great fanfare as the conquering hero of Watergate.

Everywhere he goes, it seems Woodward is asked to declare that Trump's term in office has been "worse than Watergate." Tony Dokoupil on CBS insisted that "no one died in Watergate," while Trump is somehow responsible for the vast majority of deaths from the coronavirus. On "60 Minutes" this week, Woodward colorfully described the president as a lethal pile of dynamite.

No fact-checkers were requested.

Also this week, the networks lavished attention on two discredited actors in Trump scandals: former FBI agent Peter Strzok, dismissed from the Robert Mueller probe for flagrantly partisan text messages, and former Trump lawyer Michael Cohen, fresh from serving a prison sentence. Trump's niece Mary Trump is still squeezing big money out of her lurid psychological profile on Uncle Donald. She calls him "The World's Most Dangerous Man." It helps with the royalties.

Notice that there isn't a single author with a deeply critical book on Joe Biden. Somehow, all the publishers in America weren't interested in the half of America that might buy that book. A librarian trying to help a reader interested in Biden might try to suggest Woodward's Washington Post colleague Steven Levingston and his book released last October, helpfully titled "Barack and Joe: The Making of an Extraordinary Partnership." The publisher, Hachette Books, touts it as "a vivid and inspiring account of the 'bromance' between Barack Obama and Joe Biden."

Potential buyers of that book were sold with explicitly anti-Trump terms: "As many Americans turn a nostalgic eye toward the Obama presidency, 'Barack and Joe' offers a new look at this administration, its absence of scandal, dedication to truth, and respect for the media."

You'd have "respect for the media," too, if they didn't lie about the "absence of scandal."

Pro-Trump authors are being ignored by the "mainstream" media. Former White House press secretary Sarah Huckabee Sanders has a bestselling memoir called "Speaking for Myself," but somehow, she is considered beyond the pale, even though she hasn't been to prison like Cohen.

Washington Examiner reporter Byron York has a new book out on the Mueller probe and other Trump scandal inquiries titled "Obsession: Inside the Washington Establishment's Never-Ending War on Trump." Liberal journalists will probably dismiss the book because it's published by the staunchly conservative Regnery Publishing. The networks that were so deeply invested in the fantasy of Russian government collusion with the Trump campaign won't want to hear York explain that Mueller's team of Democratic investigators knew early on there was no proof of collusion but dragged the whole charade out past the midterm elections.

Black conservative Candace Owens has a brand-new book titled "Blackout: How Black America Can Make Its Second Escape from the Democrat Plantation," published by Simon & Schuster imprint Threshold Editions. Does anyone think CBS will lavish attention on this book as it did for Woodward, also a Simon & Schuster author?