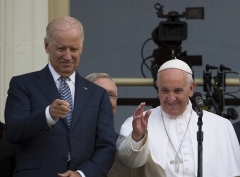 Pope Francis joins then-Vice President Joe Biden on a balcony after speaking at the US Capitol on September 24, 2015. (Photo by Andrew Caballero-Reynolds/AFP via Getty Images)

While the Republican Party has never nominated a Catholic for president, no Democrat has been elected president in the last 60 years without having the support of at least a plurality of Catholic voters, as measured by either an exit poll or Gallup's last preelection poll.

In 1960, the last Gallup poll before the election showed John F. Kennedy leading Republican candidate Richard Nixon 78% to 22% among Catholics.

In 12 of the 14 elections since then, the candidate who won the Catholic vote also won the White House.

This pattern raises an interesting question about this year's election: Will Joe Biden win the Catholic vote and become America's second Catholic president?

Or will he suffer the fate of John Kerry?

Biden often talks of his Catholicism in political settings.

"I'm a practicing Catholic, which, I guess, as a Democrat, is getting harder to be," Biden said at a Jan. 19, 2005 confirmation hearing for Secretary of State nominee Condoleezza Rice.

Tim Russert asked him: "You have changed your position on abortion. When you came to the Senate, you believed that Roe v. Wade was not correctly decided, and that you also believe that a right of abortion was not secured by the Constitution. Why did you change your mind?"

"Well, I was 29 years old when I came to the United States Senate, and I have learned a lot," Biden said in response.

"Look, Tim," he continued, "I'm a practicing Catholic, and it is the biggest dilemma for me in terms of comporting my religious and cultural views with my political responsibility."

In other words, Biden had come to believe by 2007 that it was his "political responsibility" to support the legalized killing of an unborn child.

"I still am opposed to public funding of abortion," Biden told Russert in that same 2007 interview.

On his current campaign website, Biden has a page under the link, "Joe Biden's Agenda for the Catholic Community."

"I'm a practicing Catholic," Biden says at the top of this page. "I believe faith is a gift. And the first obligation we all have is, 'Love your God,' the second one is, 'Love your neighbor as yourself.' ... 'Treat people with dignity.' Everyone's entitled to dignity, that's a basic tenet in my household."

Elsewhere on his webpage, Biden explains how he is going to treat unborn children.

"As president," it says, "Biden will work to codify Roe v. Wade, and his Justice Department will do everything in its power to stop the rash of state laws that so blatantly violate the constitutional right to an abortion."

Biden, says his website, will restore "federal funding for Planned Parenthood" and "supports repealing the Hyde Amendment," which prohibits federal funding of abortion except in cases of rape, incest or when the life of the mother is endangered.

Biden also plans to give men government documents that say they are women (and vice versa).

"Biden believes every transgender or non-binary person should have the option of changing their gender marker to 'M,' 'F,' or 'X' on government identifications, passports, and other documentation," says his website.

He also hopes to "restore transgender students' access to sports, bathrooms, and locker rooms in accordance with their gender identity."

And his plan for health care "includes covering care related to transitioning — including gender confirmation surgery."

Whether Joe Biden becomes America's second Catholic president may depend on his ability to persuade fellow Catholics they should vote for a president who supports codifying a right to abortion, forcing taxpayers to fund abortion, letting men declare they are women and providing them with government documentation — or surgery — to establish that "fact."