Will America Remain Virtuous Enough to Be Free? 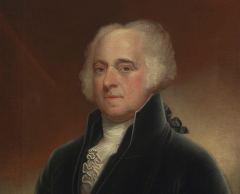 John Adams, who would soon surrender the presidency to Thomas Jefferson, ventured up to Capitol Hill on Nov. 22, 1800, to deliver the first-ever in-person presidential address in the not-yet-finished home of the United States Congress.

It was noon on a Saturday. What message did he deliver?

First, Adams congratulated the American people for building the Capitol itself. 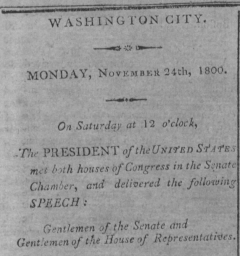 (Screen Capture from the Nov. 24, 1800 edition of The National Intelligencer and Washington Advertiser newspaper.)

"I congratulate the people of the United States on the assembling of Congress at the permanent seat of their government, and I congratulate you, gentlemen, on the prospect of a residence not to be changed," he said. "Although there is cause to apprehend that accommodations are not now so complete as might be wished, yet there is great reason to believe that this inconvenience will cease with the present session."

Then Adams pointed to morality, religion and God.

"It would be unbecoming the representatives of this nation to assemble for the first time in this solemn temple without looking up to the Supreme Ruler of the universe and imploring His blessing," he said.

"May this territory be the residence of virtue and happiness!" said Adams. "In this city may that piety and virtue, that wisdom and magnanimity, that constancy and self-government, which adorned the great character whose name it bears be forever held in veneration! Here and throughout our country may simple manners, pure morals, and true religion flourish forever!"

This was not a new theme for the nation's second president or for his contemporaries.

In 1778, while serving the newly independent United States as a commissioner to France, Adams passed by a mansion called Bellevue that King Louis XV had built as a residence for his mistress, Madame de Pompadour.

Adams came to view this estate as a symbol of the depravity of the French monarchy.

"I asked some questions about this place," Adams wrote in his diary on June 2, 1778, "and was informed that it was called Bellevue and was the residence of the Kings Aunts Adelaide and (Victoire), two of the surviving daughters of Louis the fifteenth. That this palace had been built and this establishment made by that monarch for Madame Pompadour, whom he visited here, almost every night for twenty years, leaving a worthy woman his virtuous Queen alone at Versailles..."

"The foundations of national morality must be laid in private families," Adams went on to say in this same diary entry.

"In vain are schools, accademies, and universities instituted, if loose principles and licentious habits are impressed upon children in their earliest years," he said. "The mothers are the earliest and most important instructors of youth ... The vices and examples of the parents cannot be concealed from the children. How is it possible that children can have any just sense of the sacred obligations of morality and religion if, from their earliest infancy, they learn that their mothers live in habitual infidelity to their fathers, and their fathers in as constant infidelity to their mothers."

On June 21, 1776, while serving in the Second Continental Congress, which would soon pass the Declaration of Independence, Adams responded to a letter from his cousin Zabdiel Adams, who, according to the Massachusetts Historical Society, was a Christian clergyman.

"Statesmen my dear sir, may plan and speculate for liberty, but it is religion and morality alone, which can establish the principles upon which freedom can securely stand," wrote Adams.

"The only foundation of a free constitution, is pure virtue, and if this cannot be inspired into our people, in a greater measure, than they have it now, they may change their rulers, and the forms of government, but they will not obtain a lasting liberty. They will only exchange tyrants and tyrannies," he said.

"You cannot therefore be more pleasantly, or usefully employed than in the way of your profession, pulling down the strong holds of Satan," Adams told his cousin. "This is not cant, but the real sentiment of my heart."

Twenty-two years later, when he was president of the United States, Adams delivered the same message to the Massachusetts militia.

"We have no government armed with power capable of contending with human passions unbridled by ... morality and religion," said President Adams. "Avarice, ambition (and) revenge or galantry, would break the strongest cords of our Constitution as a whale goes through a net.

"Our Constitution was made only for a moral and religious people," he said. "It is wholly inadequate to the government of any other."

What would John Adams think if he were told about the recent mass murders in Buffalo, New York, and Uvalde, Texas? Would he think they were manifestations of a gun problem in America or a moral problem?

To pass the American tradition of freedom down to future generations we must also pass down the moral and religious foundations needed to sustain it.