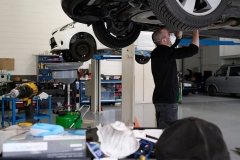 Jim and Jill were born a little more than a year apart to the same unmarried mother in Southern California.

Jim was adopted by a working-class family in the San Fernando Valley, where the father made his living as an auto mechanic and the mother as a maid.

Jill was adopted by an upper-middle-class family in Pasadena, where the father was a lawyer and the mother stayed home.

Jim was a decent high school student and football player — but not good enough at either to win a college scholarship. When he graduated from 12th grade, his father encouraged him to follow in his own hardworking footsteps as a constantly employed but only modestly paid auto mechanic. He did — earning a mechanic's certificate at the local community college and taking a job in the same shop as his dad.

Jill was a very good student at a prestigious local prep school. She was also a nearly Olympic-quality swimmer.

Harvard recruited her to join its swim team. She was admitted — and wanted to go.

But Harvard does not give athletic scholarships, and even though her adoptive father made a good living as a lawyer (too much, in fact, for her to receive financial aid), the $73,391 that the College Board said Harvard costs a student each year for tuition and fees, room and board, and books and supplies was a bit of a stretch.

By contrast, she could go to the nearby University of California at Los Angeles and live at home, and her family would only need to pay $15,052 per year for tuition, fees, books and supplies.

Her father, however, understood her desire to go to Harvard and the great opportunities it would afford her. He told her he would cover most of her expenses — as long as she was willing to take out federal student loans to cover the balance.

Four years later, she graduated, owing $24,000 to the federal government.

She was admitted to Columbia Law School and intended to move to New York and take out more student loans — and follow in the footsteps of Ruth Bader Ginsburg.

Life was quite different for the other half of this fictional pair of siblings.

Jim — the brother Jill never knew — was making almost exactly the $44,890 the Bureau of Labor Statistics says was the average annual wage in 2019 for auto mechanics. Every month, he saved whatever he could, hoping one day to have enough to cover the down payment on a small house somewhere on the fringes of the valley.

Over time, he thought, he also might start his own auto shop — if he could save even more.

Then Joe Biden was elected president.

This Monday, Senate Minority Leader Chuck Schumer held a press conference on a New York sidewalk to promote a plan he and Democratic Sen. Elizabeth Warren of Massachusetts have proposed Biden undertake.

"We have come to the conclusion that President Biden can undo this debt, can forgive $50,000 of debt, the first day he becomes president," Schumer said. "You don't need Congress. All you need is the flick of a pen."

Specifically, under the Schumer-Warren plan, the secretary of Education would issue an order forgiving up to $50,000 in federal student loan debt for each person who holds such debt.

Who would ultimately pay for this plan, and who would benefit?

The study discovered an interesting coincidence: As federal student loans increased, so did college tuition.

"Tuition increased substantially between 1995 and 2017, and that increase put upward pressure on borrowing," said the CBO. "(Some research indicates that the expansion of the federal student loan programs has induced colleges and universities to increase tuition.) For example, the average published in-state tuition — also known as the sticker price — for public, four-year undergraduate institutions increased by 120 percent (adjusted for inflation) over that period. The average published tuition for not-for-profit private institutions increased by 76 percent."

"The increase in students' ability to borrow may have induced colleges to increase their tuition," said the report.

So, federal student loans caused money to flow as follows: Jim worked as an auto mechanic and, along with millions of other hardworking non-college-educated Americans, paid federal taxes. The federal government took some of that money and sent it to Harvard and other colleges in the form of student loans. The government attributed these loans to people like Jill — the sister Jim did not know — as payment for their tuition.

The first winner in this exchange: Harvard.

The second winner: Jill, who got a Harvard degree — albeit while running up $24,000 in debt.

But the median income in a household where the householder only had a high school degree was $48,708.

Or should an auto mechanic pay taxes — and interest on an increased federal debt — so Joe Biden can forgive a Harvard graduate's student loans?