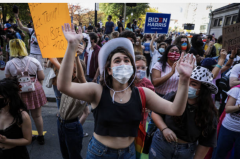 A week after the 2020 presidential election, one thing is obvious about the United States of America: It is deeply divided.

But, according to the exit polls, there were some demographic groups that did pick Trump over Biden.

For starters, according to the network exit poll published by ABC News, there was the divide between people who worked full time and those who did not.

The exit poll asked the question: "Do you work full-time for pay?"

Voters who said no went for Biden over Trump by 57% to 42%. By contrast, voters who said they did work full time picked Trump over Biden 51% to 47%.

Why do people who don't work full time prefer Biden? Why do those who do prefer Trump?

Is it a good sign for the long-term well-being of the United States that the popular-vote winner in our presidential election was preferred by those who do not work full time and not by those who do?

Then there was the divide between married and unmarried people. The exit poll asked voters: "Are you currently married?"

People who said they are not "currently" married voted overwhelmingly for Biden. He won 58% of their vote, while Trump won only 40%. Meanwhile, Trump won 53% of married voters, while Biden won only 46%.

It did not matter whether the married person was a male or female. A majority of both husbands and wives voted for Trump over Biden. Trump beat Biden 55% to 44% among married men and 51% to 47% among married women.

Why did the majority of married voters — both male and female — not want Biden to be president?

Then there was the massive gap between those who practice a religion and those who do not.

In fact, Biden only won majorities among voters who said they rarely or never attend church or religious services.

Among voters who only attend church or religious services a "few times a year or less," Biden won 52% to 47%.

Based on these polls — and looked at purely from a political perspective — there are certain cultural trends in the United States that would be good for Republicans and bad for Democrats (and vice versa).

If more people got married and stayed married, that would be bad for Democrats — and good for Republicans.

If more people started going to church or religious services, that would be bad for Democrats — and good for Republicans.

Indeed, in a nation where every voter went to church or attended a religious service at least once every four weeks, Trump would have won. Such an America would have been too religious for Biden to carry.

Another key factor in American presidential politics is the age of the electorate. According to the network exit poll, voters between 18 and 44 years of age voted for Biden over Trump by 56% to 42%. Voters 45 and older voted for Trump over Biden by 51% to 48%.

The ideal electorate from the Democratic political point of view would be dominated by unmarried people in their twenties and thirties who do not work full time and never go to church.

From the Republican point of view, it would be dominated by people who had experienced at least another 20 years in life, gotten married, found a permanent job and joined a church that they regularly attend.

Which electorate do you think would do a better job of keeping this country prosperous and free?