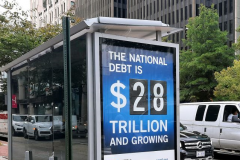 A sign at bus stop in Washington, D.C., shows the amount of the U.S. national debt, which increases every second. (Photo by JULIE CHABANAS/AFP via Getty Images)

As Congress worked in recent days to increase the legal limit on the federal debt, the Treasury kept that debt artificially frozen at approximately $28.9 trillion, where it stood at the beginning of this week.

With that limit lifted, the federal debt will take a jump upward, then keep steadily climbing, constantly increasing the burden on future taxpayers.

In 2018, according to the last complete annual report on individual income tax returns published by the Internal Revenue Service, there were 100,424,240 households in the United States that filed what the IRS calls a "taxable return." "The taxable and nontaxable classification of a return for this report is determined by the presence of 'total income tax,'" explained the IRS.

"'Total income tax,'" it said, "was the sum of income tax after credits."

In other words, the 100,424,240 households that filed a "taxable return" in 2018 actually paid income taxes to the federal government.

That means the federal debt then equaled approximately $30,253 per income-tax-paying household.

Even when the January 1989 federal debt of $30,253 per income-tax-paying household is adjusted into November 2021 dollars (using the Bureau of Labor Statistics inflation calculator), it equals only approximately $69,437.

In real terms, the current federal debt of $287,859 per income-tax-paying household is more than four times that much.

How much larger will the debt burden be when your grandchildren are paying income taxes?

President Joe Biden's fiscal 2022 budget proposal called for running a cumulative deficit of $14.531 trillion over just the next 10 fiscal years. Balancing the budget — let alone slowing the increase in the debt — plays no part in his fiscal plan.

What could the income-tax-paying households in this nation purchase for the $287,859 in debt the federal government is already holding on their behalf?

Clearly, in many parts of America, the mortgage a taxpaying family would need to buy a home would be less than the amount the federal government has borrowed in their name.

Which would you rather have over your head? A roof that you will someday own? Or a federal government that is steadily increasing its control over your finances and your life?

The federal government, obviously, has not been borrowing money from mortgage providers to purchase homes.

Even though the average interest rate for publicly traded U.S. government debt has been very low in recent years (1.437% in November 2021 compared with 5.395% in November 2001), the actual interest the government pays now is still significant. In fiscal 2021, according to the Monthly Treasury Statement, interest payments on Treasury securities hit $562.38 billion. That was more than three times as much as the fiscal 2021 cost of the Department of State ($35.814 billion), the Department of Justice ($39.261 billion) and the Department of Homeland Security ($91.069 billion) combined ($166.144 billion).

Will the federal government ever again balance its budget?

The obvious bet is: No.

Terence P. Jeffrey is the editor-in-chief of CNSNews.com.