Did an Assistant Football Coach Establish a State Religion? 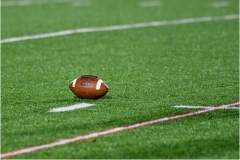 There are four minutes left in the third quarter of a public high school football game in the state of Washington.

A player tries to make a tackle with his head pointed down, and his helmet flies off. He falls to the ground and lies motionless.

An assistant coach runs out onto the field. He kneels beside the boy, and the boy says, "I'm seriously hurt. Please, pray for me."

The coach calls out, "Call an ambulance." Then he begins to pray as the boy had requested.

Did that coach just establish a religion for the state of Washington? Did he violate the First Amendment, which declares that "Congress shall make no law respecting an establishment of religion"?

Now, travel south to Alabama, where some people sometimes act as if football is the state religion.

Unlike the hypothetical example from Washington given above, Alabama provides a real-life example of a football coach getting publicly involved in religion.

Back in February 2016, the Crimson White, which is "the official student newspaper of the University of Alabama," ran a story with the headline "St. Francis of Assisi University Parish breaks ground for the Saban Catholic Student Center."

"On Monday, Feb. 1, St. Francis of Assisi University Parish hosted a groundbreaking ceremony for the Saban Catholic Student Center," said the first paragraph of the story.

"This is going to be something that is going to be a part of our legacy, Terry and I's [sic] legacy, that we're going to be as proud of as anything we'll ever accomplish," Saban said at the groundbreaking ceremony, according to the Crimson White.

"It really pleases us to get involved in a project like this where students who are going to be able to have an opportunity to have a place to gather and socialize, to really think about their faith and be affected by really positive leadership in our community and our church," Saban said.

Given that Saban is an employee of the University of Alabama, which is a public university, did his involvement in developing a specifically Catholic center for Alabama students violate the First Amendment ban on Congress making a "law respecting an establishment of religion"?

No. Saban is not only a great football coach; he is a great cultural hero in his support of the Catholic Church.

Now, move back to Washington.

On Oct. 16, 2015, the varsity football team at Bremerton High School took on the varsity team from Centralia High School. After the game, there was an all-American moment. It involved a longstanding postgame activity engaged in by Bremerton assistant coach Joseph Kennedy.

The U.S. Court of Appeals for the 9th Circuit has provided a description of it.

"Kennedy is a practicing Christian," said the court. "Kennedy's religious beliefs required him to 'give thanks through prayer, at the end of each game, for what the players had accomplished and for the opportunity to be a part of their lives through football.

"Specifically," the court continued, "'(a)fter the game (was) over, and after the players and coaches from both teams met to shake hands at midfield,' Kennedy felt called to kneel at the 50-yard line and offer a brief, quiet prayer of thanksgiving for player safety, sportsmanship, and spirited competition.' Kennedy's prayer usually lasted about thirty seconds. Kennedy's religious beliefs required that his prayer occur on the field where the game was played, immediately after the game concluded. This necessarily meant that spectators — students, parents, and community members — would observe Kennedy's religious conduct."

The Bremerton School District had barred Kennedy from engaging in this postgame prayer.

"When BSD's superintendent became aware of Kennedy's religious observances on the 50-yard line with players immediately following a game, he wrote Kennedy informing him what he must avoid doing in order to protect BSD from an Establishment Clause claim," explained the 9th Circuit.

The 9th Circuit concluded that had the BSD allowed Kennedy to continue engaging in his quiet on-field prayer after football games, the school district would have violated the Constitution's ban on establishing a religion.

"We hold that BSD's allowance of Kennedy's conduct would violate the Establishment Clause," said the court, "consequently, BSD's efforts to prevent the conduct did not violate Kennedy's constitutional rights, nor his rights under Title VII."

In sum: This court claims that allowing a public high school assistant coach to quietly pray after a football game is effectively equivalent to establishing a government religion.

Now, go back to last Thursday morning in the chamber of the U.S. Senate. Dr. Barry C. Black, the long-time chaplain of that body, was the first person to speak that day, as he is on most days.

He started last Thursday with the same three words he virtually always uses to open a day in the Senate: "Let us pray."

"Oh God," he continued, speaking into a microphone, "You are our heavenly parent, and we thank You for every expression of Your love."

Did that establish a religion? Of course not.

The Supreme Court will decide this spring whether a public school football coach has a First Amendment right to say a quiet prayer on a public field after a game.

Of course he does.