Communist China Deserves To Be Disrespected 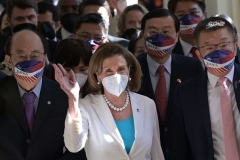 Visiting US House Speaker Nancy Pelosi waves to journalists at the parliament in Taipei on August 3, 2022. (Photo by SAM YEH/AFP via Getty Images)

We also, according to the Census Bureau, bought more than $39 billion in Chinese-made toys and games, $24 billion in clothing and textiles and $19 billion in household appliances.

Over the course of the year, according to the Census Bureau, people in this country purchased $504.9 billion in goods from Communist China, while Communist China bought only $151.4 billion from us. The result was a $353.5 billion bilateral trade deficit — by far the largest trade deficit the United States ran with any country.

In fact, in every year since 1985 — the first year that the Census Bureau reported the U.S.-China trade balance — the United States has run a trade deficit with this Communist regime.

Now, the Chinese regime is vowing to conduct massive air and naval exercises in and above the waters surrounding Taiwan — an island it does not control, but over which it claims sovereignty.

Why is it doing this? Because U.S. House Speaker Nancy Pelosi has had the temerity to visit Taiwan.

What is the difference between Taiwan and the People's Republic of China?

"Taiwan is a democracy led by a president and parliament selected in multiparty elections," says the State Department's 2021 human rights report on that country.

"The People's Republic of China," said the State Department in contrast, "is an authoritarian state in which the Chinese Communist Party is the paramount authority."

In July 2021, Chinese President Xi Jinping, who is the leader of the Chinese Communist Party, said it is a commitment of that party to bring Taiwan into the People's Republic of China.

"Resolving the Taiwan question and realizing China's complete reunification is a historic mission and an unshakable commitment of the Communist Party of China," he said.

This June, as reported by The New York Times, Gen. Wei Fenghe, who serves as China's defense minister, attended a conference in Singapore, where he declared: "If anyone dares to split off Taiwan, we will not hesitate to fight, will not flinch from the cost and will fight to the very end."

The United States has no interest in a military conflict with China. But that does not mean we must appease them, or ignore their outrageous human rights abuses, or fail to speak out about their increasingly aggressive posture toward Taiwan.

Nor does it mean that we should continue to ignore the damage they do to our own economy and manufacturing base by annually running a massive trade surplus with our nation.

On July 4, 1789, in one of its first acts, the United States Congress passed the Tariff Act, which specifically targeted trade with China. It imposed a 12.5% customs duty on all Chinese goods other than teas imported into the United States on foreign-owned ships and imposed duties ranging from 6 cents to 20 cents on pounds of various types of imported teas.

It is time for American politicians to return to the vision of the Founding Fathers when it comes to our trade relations with China.

This country should impose significant tariffs on cellphones, computers, toys, games, textiles, clothing and appliances manufactured in the People's Republic. The tariffs should be steep enough to more than cancel any advantage a manufacturer would reap by trying to exploit the cheap labor costs that China imposes on its own people through its dictatorial regime.

It should never again be profitable for a theoretically American-based business to partner with the Communist government of the People's Republic — in exploiting the people who, as of now, are subjected to that unjust regime.