Americans Spent More on Taxes in 2018 Than on Food, Clothing and Health Care Combined 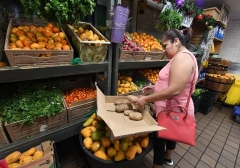 Americans on average spent more on taxes in 2018 than they did on the basic necessities of food, clothing and health care combined, according to the Bureau of Labor Statistics Consumer Expenditure Survey.

The survey's recently published Table R-1 for 2018 lists the average "detailed expenditures" of what the BLS calls "consumer units."

"Consumer units," says BLS, "include families, single persons living alone or sharing a household with others but who are financially independent, or two or more persons living together who share major expenses."

The combined payments the average American consumer unit made for these five categories of taxes was $18,617.93.

I asked the BLS to confirm these numbers, which it did while noting that the "Pensions and Social Security" section of its Table R-1 included four other types of payments (that many people are not required to make or that do not go to the government) in addition to the average of $5,023.73 in Social Security taxes that 77.21% of respondents reported paying.

"You asked us to verify the amounts for the total taxes and expenditures on food, apparel/services, and healthcare," said BLS. "Based on table R-1 for 2018, your definition for food, apparel, and healthcare matches the BLS definition and the total dollars. Your dollar amounts for federal, state, and local income taxes and for property taxes are correct, as is the amount for Social Security deductions. For the combined pension amount [$6,830.71] that we publish however, in addition to the $5,023.73 for Social Security, there is an additional amount for government retirement deductions [$135.11], railroad retirement deductions [$2.85], private pension deductions [$608.22], and non-payroll deposits for pensions [$1,060.79]."

That Americans are forced to pay more for government than they pay for food, clothing and health care combined has become an enduring fact of life.

A review of the BLS Table R-1s for the last six years on record shows that in every one of those years, the average American consumer unit paid more in taxes than it paid for food, clothing and health care combined.

Even when all the numbers for the last six years are converted into constant December 2018 dollars (using the BLS inflation calculator), the largest annual margin between the amount paid in taxes and the amount paid for food, clothing and health care was last year's $3,859.82.

Was the government you got worth it?