100 Years of the Forward Pass 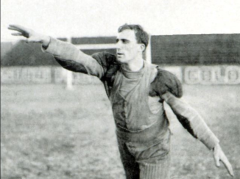 A hundred and one years ago, on a field in the Bronx, a tragedy occurred that led to a radical off-season change in the football rules—making the 2006 season the 100th Anniversary of the forward pass.

The New York Herald described what happened in a front-page story (preserved on microfilm at the Library of Congress).

“Fifteen minutes after play started New York had the ball, and Hayden, New York’s right end, was sent around the end,” said the Herald. “Moore … dived at him at lightning speed.  They crashed and both fell.  Hayden’s head struck Moore under the chin with tremendous force.  The ball slipped away and another man fell on it.  When the down was called the players saw Moore on the ground writhing in convulsions.  Hayden was unhurt.”

But Moore died from a cerebral hemorrhage.  “The grief of his father was pitiable,” said the Herald.

Crusading newspapers pounced on the event, inflaming a long-running debate over football violence.  The debate had intensified that season, John Sayle Watterson points out in College Football—History, Spectacle Controversy, when President Teddy Roosevelt—an avid fan whose son played for Harvard’s freshmen—called in leaders from the Harvard, Yale and Princeton football programs (who dominated the Rules Committee) and counseled them to reform the game.

The same day Moore died, an Indiana high school player was killed.  The next day, the Chicago Sunday Tribune printed an open telegram to Roosevelt on its front page.  The headline: “Football Year’s Death Harvest.”

“Today’s fatalities bring the total of slain to nineteen, and the injured (record only being made of accidents out of the ordinary) to 135,” the Tribune informed Roosevelt.

The Tribune’s Monday headline: “Toll Knell of Brutal Football—University and College Heads in Messages to Tribune Advocate Reform or Abolition.”

One of the more moderate messages came from Father John Cavanaugh of Notre Dame.  “Essential football is too good a sport to be abolished,” said Cavanaugh—as he called for terminating the game in high schools but not colleges.

Shaller Mathews, dean of the University of Chicago Divinity School, epitomized the anti-football academics.  “As an institution, it is a boy-killing, man-mutilating, money making, education prostituting, gladiatorial sport,” he said.

On Tuesday, the New York Times followed the Tribune with this headline: “Abolition of Football or Immediate Reforms—College Presidents Denounce Game and Demand Change—Crisis of Sport at Hand.”

The controversy had allowed football-wary administrators to outflank the reluctant football establishment of what would later be called the Ivy League.  NYU Chancellor Henry MacCracken called a meeting of schools NYU competed against.  That led to additional meetings, expansion of the Rules Committee, and deliberations in early 1906 legalizing the forward pass starting that fall.

Football fatalities were frequently attributed not to the lack of helmets (which were not actually mandated until 1939) but to tactics called “mass play”—in which multiple players, sometimes including guards or tackles, were stationed behind the line and put in motion in front of a running back.  The idea was to concentrate as much force as possible on would-be tacklers.  The forward pass, it was hoped, plus a new rule requiring teams to get 10 rather than 5 yards on three downs (later changed to four), would “open” play and diminish injuries.

The new pass was especially risky because if it fell untouched, according to the rule, the other team got the ball.

East Coast schools initially disdained it and used it sparingly.  But Coach Eddie Cochems of St. Louis University embraced it, leading the local Globe-Democrat by the end of the 1906 season to call it St. Louis’s “famous forward pass.”

The play was finally popularized in the East, when a Notre Dame receiver named Knute Rockne put on a dazzling pass-catching display in defeating Army at West Point in 1913.

But Rockne himself graciously pointed to Cochems as father of the modern passing offense.  “As with most revolutionary movements in established practice, the forward pass came in quietly, almost obscurely,” Rockne wrote in a 1930 Colliers article, excerpted in Allison Danzig’s Oh, How They Played the Game.  “Eddie Cochems, coach at St. Louis University circa 1907 [1906], enrolled a few boys with hands like steam shovels who could toss a football just as easily and almost as far as they could throw a baseball.  St. Louis played and defeated several big teams—using the forward pass. One would have thought that so effective a play would be instantly copied and become the vogue.  The East, however, had not learned much or cared much about Mid-West and Western football; indeed, the East hardly knew that football existed beyond the Alleghenies.”

So it was with football—as with many other American things—that the seat of ingenuity moved West.