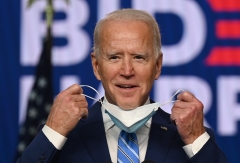 When he announced last week that he would release more oil from the American Strategic Petroleum Reserve, President Joe Biden told the American people he is doing everything possible to bring down gas prices at the pump.

That's a lie. This administration and the climate change crazies have declared war on American energy.

They want high oil and gas prices. The Biden master plan is for American oil and gas production and consumption to go to zero over the next 15 to 20 years. How do you achieve that goal? By making oil and gas so expensive and so unavailable that Americans are forced to use alternatives.

In other words, the fact that gasoline is roughly $1.25 more expensive per gallon today under Biden than it was a year ago under former President Donald Trump didn't happen by accident. This was not a result of a natural disaster, such as a hurricane, that could knock out our oil facilities. This was by design.

The left believes that it can change the temperature of the planet by forcing American energy companies to produce less oil and to force Americans to use less of it. How do you get people to buy less of something? You raise its price. This is basic high-school introductory economics.

Some on the Biden team have inadvertently admitted this. Cornell University professor Saule Omarova, a high-ranking Biden nominee for one of the country's leading regulatory agencies, said she wants to "bankrupt" U.S. oil, gas, and coal companies — and apparently has no problem putting roughly five million Americans into unemployment lines. Biden's appointee to be vice chairman of the Federal Reserve Board, Lael Brainard, was asked at a congressional hearing recently if she thought high gas prices were a problem. She hemmed and hawed and refused to answer with a simple "yes." Instead, she explained that this is a "complicated" issue. How is this complicated?

U.S. oil production is down roughly two million barrels a day from the peak production under Trump prior to COVID, yet Biden recently blamed high oil prices on the Saudis and the OPEC nations for holding back supply. Hello! That is exactly what cartels do. They use their market power to jack up the prices so they can maximize their profits.

Trump broke the back of OPEC by making the U.S. the dominant energy-producing nation in the world. Biden has handed back that power to the Arab oil sheikhs and Vladimir Putin in Russia. Now they are gouging us. What a shock!

Texas Gov. Greg Abbott said it well in August that Texas "can easily produce that oil" if Biden "will just stay out of the way."

The Biden Administration strategy is to force-feed the American economy expensive, unreliable, and made-in-China wind and solar energy. His $3 trillion Build Back Better bill would dole out more than $500 billion of taxpayer dollars to the wind, solar, and electric vehicle industry to break the back of oil and gas production. If this energy source is so efficient, why does it need a half-trillion dollars of your and my money?

Meanwhile, nearly every Biden policy has been deliberately aimed at killing U.S. oil and gas production — from killing the Keystone XL pipeline to trying to shut down other existing natural gas pipelines in the Midwest (home heating costs are going way up this winter) to shutting down much of Alaskan oil production to new Environmental Protection Agency rules making it very difficult and expensive to drill here in America. He is also preventing the mining of American coal, which is still one of the dominant sources of electric power around the world. He also wants to raise taxes on the oil and gas industry.

Now, let's be honest. Do any of these policies suggest that Biden and his liberal friends in the green-energy movement want to keep oil and gas prices low? If you answer yes to that, you probably believe that Al Gore invented the Internet.

Stephen Moore is a senior fellow at Freedom Works. He served as a member of President Trump's Economic Recovery Task Force.