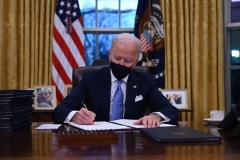 In his inaugural address, President Joe Biden stressed he wants to be the president of all Americans—left and right—and bring healing and unity to the nation. Actions speak louder than words. And on his very first day in office, Biden signed a radically divisive executive order mandating the transgender agenda.

Here’s what it says:

“Children should be able to learn without worrying about whether they will be denied access to the restroom, the locker room, or school sports.”

“People should be able to access health care and secure a roof over their heads without being subjected to sex discrimination.”

And here’s what it means:

In reality, it spells the end of girls’ and women’s sports as we know them. And, of course, no child should be told the lie that they’re “trapped in the wrong body,” and adults should not pump them full of puberty-blocking drugs and cross-sex hormones.

With this executive order, the so-called “transgender moment” has arrived at the White House. If you want to prepare yourself to effectively respond, you’ll want to read my book, “When Harry Became Sally: Responding to the Transgender Moment.”

Here’s how Gorsuch summarizes his own test:

The outcomes don’t look very good. Privacy and safety at a shelter, equality on an athletic field, and good medicine are at stake for everyone.

An unstated, frequently unexplored aspect of any “discrimination” claim is that two instances be “comparable,” that the two employees, or athletes, or patients, or shelter guests be “similarly situated.” Perhaps in the employment context, Gorsuch couldn’t see this, but health, education, and housing provide starker instances.

Start with health. Consider a case where a patient accuses a doctor or hospital or health care plan of “discrimination” because they won’t perform or offer or pay for breast removal as part of a “gender transition” procedure.

Indeed, as I point out in “When Harry Became Sally,” recognizing differences between the sexes is increasingly regarded as vitally important for good medical practice, because scientists have found that male and female bodies tend to be susceptible to certain diseases in different ways, to differing degrees, and that they respond to treatments differently.

The Institute of Medicine at the National Academy of Sciences published a report in 2001 titled “Exploring the Biological Contributions to Human Health: Does Sex Matter?” The executive summary answered the question in the affirmative, saying that the explosive growth of biological information “has made it increasingly apparent that many normal physiological functions—and, in many cases, pathological functions—are influenced either directly or indirectly by sex-based differences in biology.”

Because genetics and physiology are among the influences on an individual’s health, the “incidence and severity of diseases vary between the sexes.”

Far from its being discrimination to “rely on a patient’s sex,” it is a requirement of good medicine, which is sex-specific to the male or female body of the patient.

But that’s not all. Suppose the argument is that the doctor/hospital/insurer covers double mastectomies in the case of cancer, but not in the case of gender dysphoria. For a discrimination claim to be successful, you’d have to argue that a patient with cancerous breast tissue is comparable, similarly situated to a patient with healthy breast tissue.

Perhaps some physicians will argue that the non-cancerous breasts are in fact unhealthy because they are the cause of the gender dysphoria. That will only further highlight that what we really have here is a disagreement about the diagnosis and treatment of gender dysphoria. And policies—like the Trump administration’s regulation on Section 1557 of the ACA—are entirely defensible for refusing to treat a disagreement on medical care as if it were discrimination based on identity.

If you can recognize that these are not in fact comparable, similarly situated individuals, then it’s hard to make a claim that “discrimination” in the pejorative sense has occurred.

Yes, we’ve treated males and females differently—we have an NBA and a WNBA—but that is precisely in order to treat them equally. Equality—fairness—in athletic competition frequently requires taking the bodily differences between males and females seriously.

By comparison, it never requires taking skin color into account. Thankfully, the days of racially segregated sports are over. Our skin color makes no difference to what we do on the athletic field. Nor does it make a difference in the bathroom, locker room, or shelter. That’s why bans on racial discrimination did away with separate facilities for black and white.

But bans on sex discrimination did not do away with separate facilities for male and female—a reality that Gorsuch’s simplistic test for discrimination fails to account for. The reason? A person with male genitalia is not comparable, not similarly situated to a person with female genitalia when it comes to an emergency shelter or locker room. As a result, this aspect of the Trump administration’s Housing and Urban Development rule on sex-based housing is eminently defensible.

Biden is now in the process of undoing these Trump-era administrative actions. Thus, we’ll need litigation and legislation not solely on religious liberty, but on the substantive issues at stake: privacy and safety in single-sex facilities, equality and fairness in single-sex sports, and good medicine based on the realities of our biological make up as male or female human beings.

Through litigation and legislation, we need to make it clear that it’s lawful to act on the convictions that we are created male and female, and that male and female are created for each other, that no institution has to let males compete against females in sports, that no institution has to allow males into women-only locker-rooms and shelters, and that no physician has to engage in so-called “gender-affirming” care.

Ryan T. Anderson researches and writes about marriage and religious liberty as the William E. Simon Fellow at The Heritage Foundation. He also focuses on justice and moral principles in economic thought, health care and education, and has expertise in bioethics and natural law theory.