Will Russian Orthodox Leaders Rise to the Challenge? 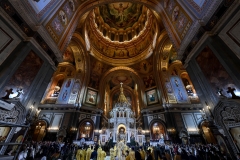 A recent Gospel reading features one of Jesus’ most famous sayings: “By their fruits they shall be known.”

After gathering the 12 men who would be his core group of apostles, Jesus instructs his followers, emphasizing the point that “A good person out of the store of goodness in his heart produces good, but an evil person out of a store of evil produces evil….”

It’s a truth which history has demonstrated time and again. And the principle that someone’s deeds indicate the reality of his nature is on display right now in Eastern Europe.

The bloody Russian incursion into Ukraine shows the fruit of an evil heart. Indeed, we can say with sadness, but conviction, that Vladimir Putin is a bad man.

This former KGB apparatchik seems bent on reassembling the old Soviet Union, or at least as many parts of it as possible. And nothing will stand in his way, not the lives of his own people, and certainly not the independence-minded Ukrainians.

Putin’s intentions — what might be called his delusions of grandeur — have brought death and destruction to Ukraine. They’ve also brought the rest of the world to a very precarious moment, when another continental conflict may be building, and the possibility of the United States being drawn into it is very real.

A number of options for responding to Putin’s aggression are being explored. Economic sanctions have been implemented, primarily those that can impede the Russians’ participation in world trade (by excluding them from the Society for Worldwide Interbank Financial Telecommunication).

These may have some effect, but by and large, they’ve come too late. Russian troops have been carrying on Putin’s bloody business in Ukraine for days. Destruction is well in progress. Bodies have fallen.

Additionally, Putin has already set the nuclear option on the table, putting his strategic forces — the units that can launch atomic weapons — on high alert. It’s been reported that this move has taken even his top military advisors by surprise. But it surely sends a strong warning to the West about doing anything that might seriously impede his hostile actions.

That warning seems to have had its effect. For all that talk about the hoped-for impact of sanctions during the State of the Union speech, Joe Biden said nothing about boycotting Russian oil or natural gas. These, of course, are the primary generators of cash Putin needs to carry on his aggression.

Cutting ourselves and our European allies off from Russian energy would require reversing the Biden Administration’s policy of opposing development of U.S. and Canadian fuel sources. It’s one thing to release part of our national strategic reserve. Restarting the pumps and reviving cancelled pipeline construction would be a major political turnaround for the all-too-“green” Democrats.

Putin’s longtime support for separatist factions in Ukraine’s ethnically Russian eastern provinces, and now his brutal military incursion, make it hard to avoid comparisons with pre-World War II Nazi aggression. But despite the echoes of Hitler, Putin does have some not-unreasonable security concerns about the gradual eastward advance of NATO. He views the prospect of NATO missiles on Russia’s border in much the same way Jack Kennedy viewed Soviet missiles in Cuba.

The challenge now is separating Putin’s legitimate fear of Russia being encircled from his dreams of Soviet revival. This should be a focus of negotiations that have begun.

The vigorous, even heroic, Ukrainian resistance has made it clear that this little war isn’t going to be quite the walk-over Putin expected. Russia is already bleeding. Opposition is building domestically. The more Russian soldiers are sent home in body bags, the harder maintaining home front support will be.

The one institution that has the presence and prestige to exert real pressure internally is the Russian Orthodox Church. Putin has draped himself in the mantle of Christian faith and virtue for years. Indeed, he’s the one former-Communist figure of consequence to recognize the spiritual heart of the Russian people.

He’s spoken to that heart frequently, exalting Christian family life, and making himself a spokesman for traditional virtue. While this moral stand may contrast with his ruthlessness and personal corruption, it’s worked for him. His strong opposition to the global LGBTQ agenda has even gained him admirers internationally.

Because of this identity, the Church is in a strong position to exercise tangible influence. That this hasn’t happened to any meaningful degree so far is a source of great disappointment.

We should pray that Russian Orthodox leaders rise to the challenge. We should also pray for Vladimir Putin. Pray that his heart be changed. Pray that we may yet see good fruit.

And pray for Ukraine.