Step-by-Step to How Communism Undermines Christianity 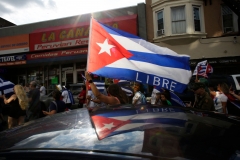 People wave Cuban flags as they drive down a road during a protest showing support for Cubans demonstrating against their government, in Union City, New Jersey, on July 18, 2021. (Photo credit: KENA BETANCUR/AFP via Getty Images)

We tend to assume that religion is only about transcendental things, but this is incorrect.

The root of the word “religion” is the Latin term “lig,” meaning to bind. Your religion binds you to a certain way of life, with a corresponding view of the world.

Your way of life is expressed in your political outlook. Religion thus informs politics. In many ways it precedes politics. You can trace political trends back to their religious roots.

We don’t always think about the political implications of the worldview we hold as Christians. For instance, the fact that our human nature is based on the image and likeness of God in which we’re created probably wouldn’t seem to be the stuff of politics.

Yet, in the Judeo-Christian moral heritage, your reflection of God’s image is the basis of your dignity as a person. We expect society to respect that fundamental human dignity. This effects our political views on a range of issues, from opposition to abortion, to how people should be treated from birth until the end of natural life.

It shapes our understanding of liberty as well. Being made in the image and likeness of God (not created by other humans, by government, or by society), people are entitled to be free. That’s the basis of our constitutional rights: freedom of speech, freedom of assembly, freedom of religion, and all the rest. God has given us certain gifts and we must be free to use them in building our own lives and attending to the wellbeing of our families.

Similarly, our human nature demands that individuals be treated with justice. Creatures who bear God’s image and likeness should not be misused and exploited. We are not meant to be pawns of other people’s whims, or helpless victims of either prejudiced attitudes or abstract historical forces. We are independent agents with destinies of our own.

And so, the Church has developed a comprehensive set of teachings about social justice that demand fair treatment and equality before the law.

Such truths are based on divine revelation and so are religious precepts (referred to as the Cardinal Virtues). But they’re political precepts as well. Our civilization and civic arrangements rest on this worldview. Thus, religion and politics are intertwined.

Certain worldly philosophies have become religions in themselves. Marxism is the most obvious example. It instills its own worldview in those who embrace communist principles, and it binds them to a certain way of living and acting, based on how they see reality.

The primary way in which Marxism operates is by co-opting, in a distorted manner, Judeo-Christian religious/political precepts. So, for instance, social justice is interpreted in the communist worldview not as human dignity, freedom, and equality before the law, but as redistribution of wealth, class warfare, and ongoing conflict between races and ethnic groups (as in critical race theory). These days, any aberrant forms of gender identity and sexual expression also seem to fall under the social justice label.

The religious root of this Marxist worldview is the assumption that humanity has nothing to do with the image and likeness of God, but rather is merely part of the material world. Therefore human beings can be reshaped in any way that suits current desires, attitudes, or expectations.

The practical consequence of this perspective is loss of freedom. Without respect for human dignity, communism inevitably devolves into total control by a strong elite group. And with the loss of freedom, equality becomes a sham, and justice is impossible.

The state has total power to determine what constitutes good and bad, and stripped of their God-given rights, people are mentally and physically abused. They can be imprisoned, tortured, even killed, as suits the values and objectives of the state.

The destruction of rights under communism has been playing out for 62 years in Cuba, only 90 miles from our shores. Presented by Marxists as an example of the ideal communist society, with excellent medical and educational systems, Cuba has, in reality, been a humanitarian nightmare. The people’s wealth has been stolen by the government, their freedom curtailed, their hopes for a better life crushed.

This is why we’ve seen a steady stream of refugees from this alleged Marxist paradise over six decades. And it’s why, in the last couple of weeks, we’ve observed massive crowds in the streets of Cuban cities, demanding recognition of their human dignity.

Indeed, Cuba appears to be approaching some kind of breaking point. And this unfolding drama holds an ironic lesson for us in America.

Over the last few years, we’ve witnessed growing sympathy for Marxist ideas, especially among our young people. And since January, we’ve watched a political regime pursuing changes in our governmental system that are strongly influenced by communist thinking.

We should recognize that the crisis we face in our country is as much religious as it is political — just as the people of Cuba are experiencing their own religious awakening. We human beings are religious in our God-given nature. There’s no dismissing that fact.

And that’s why we should all pray that God’s will might prevail.

For Cuba, let us be as Cubans ourselves, and pray “Cuba libre!” (Free Cuba!). For our own country, let us pray “God bless — and God save — America!”

A priest of the Diocese of Camden, New Jersey, Rev. Michael P. Orsi currently serves as parochial vicar at St. Agnes Parish in Naples, Fla. He is host of “Action for Life TV,” a weekly cable television series devoted to pro-life issues, and his writings appear in numerous publications and online journals. His TV show episodes can be viewed here.