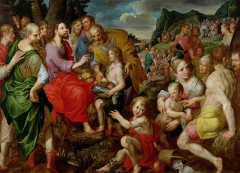 A recent Gospel reading featured the famous incident of Jesus feeding the 5,000. This passage, from the Sixth Chapter of John, could very well qualify as the most frequently misinterpreted story in the Bible.

Many people like to present the scene as a sort of grand picnic in which the local folks all get together and share the contents of their lunch baskets.

There are several reasons for giving the story such a spin. Some people wish to highlight the idea of neighborly cooperation (in itself a perfectly fine thing). Others, misled by the “modernist” perspective, try to downplay the miraculous aspects of Scripture (even Thomas Jefferson tried that, compiling his own miracle-free “Bible”).

Still others are intent on promoting the notion of collectivism — what might more accurately be called “socialist redistribution.”

But Jesus’ multiplying the five loaves and two fish was, in fact, a miracle. It was one of the signs of His divine nature.

There’s an interesting little detail at the end of the story, often overlooked, but perhaps suggestive. We’re told that after the crowd had eaten, its members intended to declare Jesus their king. He would have none of it, however, and slipped quietly away.

Was this the Lord’s way of showing He didn’t want people to become dependent on government?

Forgive me for letting my political predilections carry me away. Sometimes I just can’t help myself.

Of course, I realize there were other reasons Jesus resisted their call for kingship. His ministry wasn’t yet complete. There was more to do before revealing His true identity.

Still, He had a keen understanding of our human nature. And I have no doubt He could see the danger in indulging people’s love of free things.

We all like getting stuff for nothing. And indeed, the occasional treat, the gratuity, the free sample, the door prize can be wonderful. It’s like Grandpa buying you an ice cream cone when you were a kid.

But you can’t live on that as a regular practice.

The Book of Genesis describes how God made the earth and everything in it — the plants, the animals, all created things — and He gave them to man to be used productively. When we avoid being productive, by depending on things we can obtain for free, we become sapped of initiative. We cease to use the God-like capabilities He gave us when He created human beings in His own image.

We need to work, to develop ourselves, physically and intellectually, to gain a sense of virtue. We need to know we’re doing something that’s meaningful, for ourselves, for our families, and for society. We need to feel good about what we’ve accomplished.

When we don’t do this, we’re acting in a less-than-human way.

I recall being in Russia a couple years after the fall of the Soviet Union. My impression of the people was that they had been stripped of their self-worth. They were accustomed to being given everything by the government. Admittedly, that often amounted to very little. Nevertheless, they were dominated by a pervasive sense of dependency and a dearth of initiative.

There was precious little in the shops, and the shop attendants had little interest in selling it to their customers. In my hotel, I sent my dirty shirts to be cleaned, and they came back pressed but unwashed.

This lack of purpose was the result of 70 years of communism with its total focus on state benefits. And sad to say, that outlook is beginning to emerge here. It’s evident, for instance,  in the widespread enthusiasm over the post-lockdown stimulus checks, and the consequent resistance among many people to going back to work.

“The government is giving us free money. Whoopee!”

Now, to be sure, the lockdown hit plenty of people, and it hit them hard. Jobs were lost, businesses closed. And of course, there are those who would be incapable of supporting themselves, regardless of the pandemic. We have assistance programs for good reasons.

But there are plenty of other people who are perfectly capable of working — and who could readily find work at the many companies currently recruiting desperately — but who have gotten used to being taken care of by “Uncle Joe” in the White House.

Businesses all over the country are reporting unfilled positions. But people are responding to the perverse incentive to lay back on the stimulus checks. And so jobs go begging.

This has consequences. As it’s often been said, “An idle mind is the devil’s workshop.” When you do nothing good, you’re likely to do something bad.

And so we’re seeing an increase in drug overdoses. People are dying as a direct result of these government checks and the excessive, unhealthy leisure that money has brought. With no meaningful way to spend their time, no sense that their survival and the welfare of their families depend on them, people are destroying themselves.

Nothing is free. There’s always a price to pay.

Government handouts are not a blessing. At best, they are a temporary expedient to address a short-term emergency need. But as an ongoing way to operate a society, they don’t work. And the proof of that has been seen everywhere. They’ve failed in Russia, in Cuba, in Venezuela. And the signs of failure are appearing here as well.

They fail because they encourage us to act in that less-than-human way. And so we become less than human.

When we work, on the other hand, when we use the talents given us by Almighty God, we enjoy the fruits of our labor. And other people benefit as well: those whose welfare is our responsibility, and those whom conscience and Christian morality oblige us to assist.

We might not have Jesus’ miraculous ability to multiply the loaves and fishes, but we can be what God intended us to be: human.