The Ethics of a COVID Vaccine 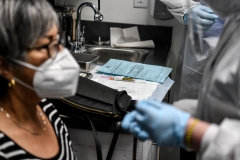 A COVID-19 vaccine is ready to be given to a volunteer at the Research Centers of America (RCA) in Hollywood, Fla. (Photo credit: CHANDAN KHANNA/AFP via Getty Images)

As a priest, I’ve often been asked to provide a document which someone can use to show that they or their children are exempt, on religious grounds, from being vaccinated. I’ve never been able to do that, because the Catholic Church has no moral objection to vaccines, as such — a fact that generally comes as a surprise to those making the request.

Some other faiths do object to vaccination, and state authorities usually honor such concerns of conscience.

Resisting vaccination has its risks, however. If there is an outbreak of the disease for which you’ve declined vaccination, you could be quarantined, refused entry into school, even put into isolation because you might be a carrier. Legal power to do such things is based on the principle that the state has a “compelling public interest” in protecting the general population.

The early 20th-Century incident of “Typhoid Mary” is the most famous illustration of extreme state action for the sake of public health. A woman who carried typhoid, but showed no symptoms herself, was isolated on an island in New York’s East River, after infecting more than 50 other people.

Much hope currently rides on finding a coronavirus vaccine. Announcements of new research or encouraging lab results always grabs public attention and impacts pharmaceutical company stocks. But while we may long for a “silver bullet” that can end this plague, there are moral and ethical questions involved in drug development. And on these the Church does speak.

One key concern has been the use of cells extracted from aborted babies. Catholic teaching on this issue is that it would be immoral to produce any medication using “biological material” from fetuses aborted for the purpose of obtaining their cells.

However, someone arguing they should be exempt from vaccination requirements on that basis would have a hard time making a case from the Catholic point of view.

Dignitas Personae, a 2008 instruction issued by the Congregation for the Doctrine of the Faith, points out that stem cell lines reproduce so easily and abundantly, and are distributed so widely through both commercial and free channels, that their connection to “illicit” sources becomes blurred. It’s hard to make a direct connection to aborted babies, or even to know in what country the cell lines originated (much less what laboratory).

That goes to show how problematic moral theology can be. Our most diligent attempts to avoid participation in evil are often impeded by the complexities of modern life and science.

Former President George W. Bush addressed this problem in 2001 when he restricted federal funding for research using stem cell lines derived from aborted fetuses. Only “historic” cell lines, those which had been cultivated over a period of years, were permissible. Recently, both the State Department and a new ethics advisory board created to evaluate scientific research involving fetal tissue advised the Trump administration similarly.

This issue has taken on new urgency, as we hear reports about progress on coronavirus vaccines. Many faithful Christians are apprehensive about facing a choice between risking COVID-19 and accepting a vaccine which may have been developed using fetal cells.

Add to that the social pressure — or even the possible threat of legal compulsion — to accept vaccination, and you face a real dilemma. This isn’t an academic question. Forced vaccination is being discussed by public health officials in various parts of the country.

According to both Christian tradition and our nation’s guiding legal precepts, government has no right to violate bodily integrity, that is to force you to accept vaccination against your will.

However, back in May, Newsweek raised the question of vaccination requirements with several legal experts. The consensus was that even if no actual mandate is imposed, a price could be attached to not being vaccinated.

At the federal level, refusing vaccination might bring tax penalties or the denial of benefits. The precedent under which such punishment could be imposed, Newsweek reported, is the individual mandate in the Affordable Care Act (Obamacare). As for the states, a 1905 Supreme Court case, Jacobson v. Massachusetts, found that the 10th Amendment of the Constitution gives health officials applicable police powers. That ruling is still in effect.

We don’t know what might be down the road (at this moment, we don’t even know if a vaccine is forthcoming). But with such an obvious potential conflict between moral principle and government authority, it’s likely the Supreme Court would have to weigh in again, should coercive measures be attempted.

We have to ask ourselves how many of our human rights and civil liberties we’re willing to sacrifice for the sake of health. It’s not an easy question, and science keeps making it harder all the time.