Don't Be Fooled. Attack by Lady Al-Qaeda Islamist Against Texas Synagogue Was Motivated by Anti-Semitism 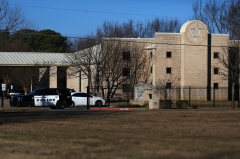 The hostage-taking of a rabbi and three congregants at the Beth Israel Synagogue in Colleyville, Tex. Saturday by Malik Faisal Akram was not simply to coerce authorities to free Aafia Siddiqui, known as Lady Al Qaeda, but itself specifically an act against Jews in their foremost institution: a synagogue.

It was not random.

This needs to be said inasmuch as the FBI is suggesting that the selection of a synagogue was simply a coincidence. To those following the growing anti-Semitism, actual Jew-hatred, in the American Muslim community, the attack that happened Saturday was the latest in a long list of Islamists targeting Jews and synagogues, from New York/New Jersey in the east across the country to California in the west.

As the attack was unfolding and it became apparent that a radical Islamist was spearheading the attack, we anticipated there would be all types of excuses supplied by law enforcement and the Biden Administration, attributing the horror to some other motive extraneous to Islamist anti-Semitism. We would hear, as dozens of times in the last fifteen years, that the perpetrator was “mentally unstable,” and that he was a “lone wolf.” The fact that the perpetrator was from a far-away English city near Manchester, had collaborators there, and just recently came to America indisputably points to a deliberate selection of a synagogue here in America. This cannot be attributed to some local who happened to be walking in the neighborhood and coincidentally passed a synagogue. Out of political correctness, or fear of being called Islamophobic, or because the Muslim community has become an integral and necessary component of the Democrat machine,  the FBI, the media, and powerful voices routinely censor reasonable propositions that point to danger to the Jewish community from elements within Islamist circles here in America.

Until a decade ago, the FBI monitored certain enclaves and imams fomenting Jew-hatred. For the reasons mentioned above, they appear to have suspended these programs. The same unfortunately can be said of the U.S. Department of Justice. The downside to the cessation of vital monitoring is expanding attacks by American Muslims against innocent Jews walking in the streets, going to synagogue, eating at kosher restaurants, and wearing their yarmulkes or any noticeable Jewish piece of clothing. It is distressing that in today’s liberal and woke-controlled society, Jew-hatred seems to be an acceptable activity if performed by certain, more preferred minorities.

One of the hostages in the synagogue, Jeffrey Cohen, told reporters that Akram spent a good deal of his initial attack denouncing Jews. In fact, Lady Al Qaeda, who is in prison for attempting to murder U.S. soldiers and in whose cause Mr. Akram was holding hostages at the synagogue, is a notorious hater of Jews and Israel and throughout her trial demanded that no Zionist Jew be allowed to sit on the jury. Many high-profile and lesser known imams look to the notorious Protocols of the Elders of Zion to blame Jews for the world’s problems and specifically Islam’s difficulties. This attitude originated with the Grand Mufti of Jerusalem, a Muslim collaborator with Adolf Hitler in the final extermination of the Jewish people during World War II.  Unfortunately, this Grand Mufti is held in highest esteem among all Islamic leaders in the last century and thus his Jew-hatred had been codified, distributed, and is continually being acted upon by those adherents who feel they are fulfilling the wishes of their Grand Imam.

Indeed, many Muslims within modern American cities are routinely referring to Jews as “enemies.” This is incendiary and without doubt foments the actions we saw in Texas and have witnessed across America in the last decade. Labeling someone with whom you disagree as an “enemy” and calling for retribution against them is an old-world, tribal attitude being imported into this country. Until recently, the American disposition was to disagree civilly in large part because we shared an overriding commonality as Americans. As this transcendent pride and kinship in being American dissipates and, worse, is castigated by today’s identity politics and wokeness that purposely separates us and pits us against each other, we will see more attacks by those who brand Jews and others (whites) as “the enemy.”

There is no doubt that Speaker Nancy Pelosi’s blessings and embrace of the “Squad” -- which demonstrates extreme anti-Israel attitudes and even anti-Jewish sentiment -- is allowing this anti-Semitism to grow when coming from the constituencies of the Squad members Pelosi befriends. As former Arkansas Gov. Mike Huckabee said: “How are we going to expect to keep America-hating, anti-Semitic terrorists out of our synagogues when we can't even keep them out of Congress?"

Three years ago, when we asked Speaker Pelosi to condemn anti-Semitism as a stand-alone evil, Pelosi would not do so out of fear of offending certain minority constituencies vital to her party. Pelosi’s obsession with victory and power is culminating in an acceptance of anti-Semitism, notwithstanding all her flowery protestations and calls against “hate.” The confluence of ignored anti-Semitism growing in the American Muslim community and unwillingness by leftists to denounce it when coming from their constituents portends a danger to America and its Jewish community. To our regret, too many establishment Jewish organizations whose first and foremost loyalty appears to be leftwing ideology and wokeism and not the defense and dignity of the Jewish people are silent enablers of this worrisome phenomenon afflicting today’s American political scene.

Rabbi Aryeh Spero is the president of Caucus for America, spokesman for the Conference of Jewish Affairs, and author of "Push Back: The Battle to Save our American Judeo-Christian Heritage."