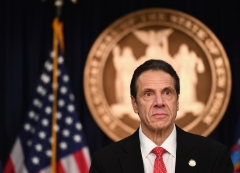 Many Americans have witnessed daily briefings in which New York State’s governor, Andrew Cuomo, makes repeated demands of President Donald Trump and exploits his moment in the sun by condemning the president and even maligning him.

Instead of constantly complaining and accusing Trump of prioritizing politics over the virus, it’s about time Cuomo apologized to President Trump and to those Americans across the country who specifically helped NYC during her time of need. It is not President Trump who has fallen short in doing his job, rather Gov. Cuomo and his sidekick Bill de Blasio, mayor of New York City.

A few weeks ago, Cuomo was demanding ventilators, masks, gowns, and hospital beds. He made no demands of himself, rather of the president. But now many are asking why the governor had not spent his many years in office accumulating the supplies needed for the emergencies and epidemics that surely transpire. In President Trump’s desire to help the country and specifically the state where he was born and raised, Mr. Trump did not haggle over the question of whose responsibility it is to take care of state needs, but instead dove headlong to supply what New York needed. While Cuomo spent his days grandstanding and pontificating, and alternating his made-for-TV attire between informal leather jackets one day, blazers the next, presidential suits, and then sweaters, Mr. Trump was marshaling and corralling every force in this country and around the globe to provide the needs of New York state. Cuomo always looks well-rested while Mr. Trump, the heroic workhorse, looks exhausted. We now know why: one is playing soap-opera governor while the other is a minute-by-minute, indefatigable president.

Mr. Cuomo is never satisfied. He spoke of needing 30,000 ventilators in mid to late-April, but was giving ventilators away just a couple weeks later.

On another occasion, enjoying the limelight and adulation he was receiving from the media for maligning President Trump, Andrew Cuomo demanded more than a hundred thousand hospital beds. At the time, many wondered where were the years of expected planning by the governor of New York and the mayor of New York City for an event precisely such as this. After all, the state of New York as well as New York City has a budget for Health Departments exceeding the entire budgets of some American cities. It turns out, the governor opted to fund some pie-in-the-sky solar project instead of purchasing ventilators five years ago.

As is known, New York state and New York City have bragged about their autonomy from the federal government. Proclaiming their jurisdiction is above federal law, they defied ICE and the federal immigration laws. Many are now wondering how a city and state that defied federal authority, as well the president of the United States, by declaring themselves sanctuary city and sanctuary state have suddenly flipped by demanding the federal government micromanage and pay for all their supplies.

Cuomo and de Blasio, the anti-feds, accept no blame and now place all responsibility on the feds. Cuomo and de Blasio demand the American taxpayer pay for their mismanagement; de Blasio asking for $7 billion just for NYC, all the while maligning the very president who heroically helped NYC, calling Trump a "hypocrite" who "seems to enjoy stabbing his home town in the back."

Many are asking if the billions of dollars boastfully spent by de Blasio and Cuomo on illegal immigrants, providing corpulent benefits to hundreds of thousands of illegal aliens, depleted the city of the reserves necessary to carry on the basic nuts and bolts and supplies needed to properly manage and sustain a city. Some are questioning whether Cuomo and de Blasio’s pre-occupation with enacting a leftist social agenda and prioritizing identity and sexual politics took precedence over old-fashioned, bread-and-butter management. They seem to have chosen virtue-signaling rule over dry but essential care-taking management. Cuomo and de Blasio made what they call a “moral” decision, namely, that the invitation to and support of illegal aliens is more important than spending on the needs of everyday, native New Yorkers for the inevitable rainy day.

Though Rachel Maddow and so many of the cynics and smug elitists of the left who’ve come to dominate the New York scene smarmily accused the president of not being able to furnish hospitals beds, Mr. Trump did so. And, the whole nation saw him do it. The ship, named the Comfort, sailed into New York Harbor on the Hudson River. It was a mammoth and gleaming, floating hospital with hundreds of beds, surgery rooms, 5,000 units of blood, emergency rooms, lighting, a staff of 1,200, and the most modern moving medical facility in the world. It was brought to New York not by its mayor or governor but by Mr. Trump…in Donald Trump fashion.

Yet, Cuomo demanded even more beds! Donald Trump approved a request for the Javits Convention Center to be transformed into a hospital. Mr. Trump supplied the men and women necessary to convert the Center into a 2,500-bed facility. In the end, hardly any of the beds were needed or used. The pompous governor of New York demanded much more from America, from the president, and our patriotic citizens than was actually needed. Mr. Cuomo: Isn’t it time you apologized and thanked the president and the thousands of Americans who sweated to deliver beds and make hospitals based on your exaggerated claims? In the end, the president’s assessment of need was right, not yours.

Some wonder if New York City big mouths like Rachel Maddow and Joy Behar would extend themselves for victims in Paducah, Ky. as those from Kentucky have eagerly jumped to help those in New York City. Would the Manhattan/Brooklyn chattering class help the Franklin Graham crowd the way his Samaritans Purse did when coming to NYC to set up makeshift hospitals in Central Park?

Even after all this, Mr. Cuomo keeps demanding more, and Mayor de Blasio continues asking for more money. De Blasio especially, still refuses to express any gratitude to Mr. Trump. Cuomo has limited prescriptions of hydroxychloroquine, to the consternation of some county executives. Mr. Trump had suggested the legal drug had potential promise. Shame on the governor and mayor. Their policies of always being contrary to President Trump have hurt the people of New York.

Many feel that instead of more demands, it is time these men apologized for their arrogance and sense of entitlement, and recognized that much of the catastrophe in New York is due to their lack of preparedness and their incapacity for real management. Many New Yorkers are upset with Mayor de Blasio for not managing the subways and buses in such a way as to lessen the contagion inherent in packed mass transit ridership. Plans such as decreasing ridership per car (social distancing) by adding more cars and by increasing train runs could have been utilized, but were not. No warnings were issued to mass transit riders until way after the contagion had already spread. Many New Yorkers wonder why the mayor and his health commissioner were urging people to go downtown to Chinatown long after President Trump had already prohibited incoming flights from China.

New Yorkers are wondering why Mayor de Blasio kept New York City schools open a week after other districts had already closed. It is Cuomo and de Blasio who made profoundly wrong decisions that without doubt increased the deaths of the elderly in New York City’s nursing homes. These deaths constitute over half of the COVID-19 deaths in New York. Nursing homes are a state responsibility, not a federal one. It has nothing to do with Mr. Trump. When confronted by the nursing home crisis, Cuomo dispassionately answered: “It’s not our job." Nothing, it seems, is his responsibility for actually doing.

Now New Yorkers are anguishing over the bare shelves in many New York City supermarkets, when the mayor should have coordinated truckers, vendors, and food service suppliers to keep food flowing into New York. The highways and thoroughfares within in the city are wide open for food trucks to flood right in. Where are they? It seems that it is Donald Trump, not Cuomo and de Blasio, who plans steps ahead during a crisis. He is always thinking and doing, as opposed to those who gripe and demand and whine....and sermonize to the delight of those whose Trump Derangement Syndrome is stronger than their love of people and city.

Many Americans are wondering if New York State’s shortfall of money is due to the governor’s self-righteous insistence that income producing fracking and shale exploration be prohibited in New York. Americans are wondering why they should bail out New York State’s budget woes that, really, pre-date COVID-19. After all, it is a deficit caused by the state’s high taxation policies pushing business out of the state and scaring away achievers for fear of being targeted and penalized by New York State. Why should frugal Americans in other places foot the bill for the obscenely high pensions given to unionized New York state workers? Is coronavirus being used as a way to fleece America for the high maintenance give-aways that are really behind New York’s financial woes? Should America bail-out New York again as it did in the 1970s?

We know how Mr. Cuomo feels about the “deplorables," the half of the country who voted for Trump. He has told pro-life and pro-Second Amendment New Yorkers they don’t belong in New York. Yet, he wants the deplorables to pay his bills. He has told those who are pro-traditional marriage that their views are anathema and they belong somewhere else, since these are not the values of true New Yorkers. Yet we should pay his bills and we should supply the materials to run his mismanaged state. The elitists believe we should take from our families to financially support them, the “superior” ones, as well as the almost one million illegals invited into New York.

Cuomo, like Hillary Clinton and so many smug, anti-tradition, cosmopolitan “citizens of the world,” the snob-set, who have taken over New York City in the last 15 years, think Trump conservatives are deplorables. Yet it is those deplorables who outfitted the Comfort ship of rescue that arrived at Pier 90 on Manhattan’s West Side.

Rabbi Spero is author of Push Back, president of Caucus for America, and a frequent guest on Fox News and Newsmax.