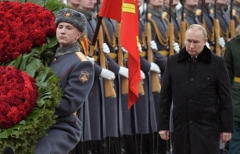 Russian President Vladimir Putin attends a wreath laying ceremony at the Tomb of the Unknown Soldier by the Kremlin wall to mark the Defender of the Fatherland Day in Moscow on Feb. 23. (Photo credit: ALEXEY NIKOLSKY/SPUTNIK/AFP via Getty Images)

What was running through the mind of Russian President Vladimir Putin as 150,000 of his troops massed along the border of Ukraine? Military experts in the West say the Ukrainian defenders are no match for the Russians, though the Russian army has not been in a major war for decades. The Ukrainians from their bunkers are issuing blood-curdling threats, and they are armed to the hilt. They have the advantage of fighting on their home turf. Their backs are against the wall. Even the women of Ukraine are armed. Here is my reasoning for saying things in the Ukraine are going to come out much differently than they look now.

A couple of weeks ago, I saw something in Putin's eyes that I had not seen before. He seemed to lapse into hesitancy. For the first time ever, he seemed a bit flabby. Is he keeping with his martial arts regimen? Frankly, he looked stunned and put me in mind of our almost 80-year-old president, President Joe Biden. Could Putin be giving his grand design a second thought? Could a return to the days of Russian imperialism be, at least temporarily, put on the back burner?

Those motivations, which the great Russian scholar, George Kennan, spoke of in the years of Soviet aggression, might finally be fading away. There were two motivations, ideology and paranoia. By the 1980s, the ideology, known as communism, had lost its grip even on members of the politburo. Then there was Russian paranoia. It seemed to outlast communism. Today, there are signs in Russia that even paranoia is abating. Possibly, does this explain Putin's hesitancy?

Recently, Russians living in the motherland were polled about invading Ukraine, and they, too, seemed hesitant. They had reversed themselves in their hostility toward their neighbor to the south. For many decades, they had been as hostile toward the Ukrainians as Putin. Yet now they were more favorable to their neighbor. Forty-five percent harbor more friendly feelings toward Ukraine than they did in years past. Only 43% were hostile, and my guess is that that 43% is not particularly solid — especially when they consider Western sanctions coming down on them. In 2014, the Russian military was widely backed when it invaded Crimea. Today, there is little enthusiasm for such action, even as Putin sends in more troops to fight. Is this what has taken the twinkle out of Putin's eyes?

Or am I exaggerating? He has massed the largest land army in Europe since World War II. Will he use it to the utmost? What about that 45% of the Russian people who view Ukraine favorably? Will they protest at supporting Putin's war? Or the 43% who view the Ukrainians unfavorably — will they go to war to stop the Ukrainians? Stop them from doing what?

Let me add another thought. Russia is not an economic success. Without petrochemicals, Russia probably would be categorized as a developing country that, by the way, is taking a long time to develop. In some respects, Russia is a dying country. Its birth rate is down; its mortality statistics are up. Now it is sending in a vast army to another sick economy to take it under Russian suzerainty. Possibly, Russia will be able to take other backward economies under its wing, but that only will leave Russia as a nuclear power with a congeries of feeble economies gathered around it. This is not a sign of Russian greatness.

In this column a couple of weeks ago, I talked about my visit with Putin's predecessor, Boris Yeltsin, in the White House back in the days of President George H.W. Bush. Yeltsin was very proud of Russia's European heritage. Now his successor is contemplating war in Europe. Putin has a huge army arrayed along Ukraine's border. He has all of Europe opposed to him. He has all of NATO preparing sanctions against Russia. Putin represents the part of Russia that still is hostile not only to Ukraine but also to Europe. Yeltsin spoke for the part of Russia that wants to live with Europe in peace. Who will win?