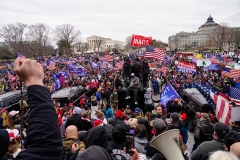 Crowds gather outside the U.S. Capitol for a "Stop the Steal" rally on January 6, 2021 in Washington. This was before some in the crowd stormed the building. (Photo by Robert Nickelsberg/Getty Images)

President Donald Trump, it turns out, was being quite literal when he told us Jan. 6 would be "wild."

And so Wednesday was, but it was also disastrous for the party and the movement Trump has led for the last five years.

Wednesday, the defeats of Senators Kelly Loeffler and David Perdue in Georgia's runoff elections were confirmed. This translates into the GOP losing the Senate for the next two years.

And the new 50-50 split will put Vice President-elect Kamala Harris, the president of the Senate on Jan. 20, in position to cast the deciding vote on every major issue where the two parties are evenly divided.

Wednesday, there also came the acceptance by both houses of Congress of Joe Biden's 306-232 electoral vote victory over Trump. The last potential hurdle to Biden's inauguration as 46th president of the United States has been removed.

But the worst of the day's events for Trump came when a segment of a friendly crowd of 50,000 he just addressed concluded its march down the mall to the U.S. Capitol by smashing its way into the building and invading and occupying the Senate and House chambers.

Members of Congress were forced to flee and hide. A protester, an Air Force veteran, was shot to death by a Capitol cop. Vice President Mike Pence, who was chairing the joint session, was taken into protective custody by his Secret Service detail. Doors were broken open. Windows were smashed, and the building was trashed.

All this was seen on national television from midafternoon through nightfall. The East and West fronts of the Capitol were occupied for hours by pro-Trump protesters, whom the president, his son Don Jr., and Rudy Giuliani had stirred up in the hours before the march down the mall.

What Americans watched was a mob occupation and desecration of the temple of the American Republic. And the event will be forever exploited to discredit not only Trump but the movement he led and the achievements of his presidency. He will be demonized as no one else in our history since Richard Nixon or Joe McCarthy.

Yet, just two months ago, Trump rolled up the highest vote total ever by an incumbent president, 74 million. And, according to four major polls, his approval remains where it has been for four years, between 40 and 50%.

What took place Wednesday was a disgrace and a debacle. But it was not, as some have wildly contended, comparable to 9/11 or to the British burning of the Capitol in 1814 during the War of 1812. That is malicious hyperbole, establishment propaganda.

On Sept. 11, 2001, more than 3,000 Americans died horribly when Manhattan's World Trade Center twin towers came crashing down and the Pentagon was hit by a hijacked airliner. And there have been far more serious events in the lifetimes of many of us than this four-hour occupation of the Capitol.

In May 1970, after Nixon ordered an invasion of Cambodia to clean out Communist sanctuaries, National Guard troops, in panic, shot and killed four students at Kent State University in Ohio.

Hundreds of campuses exploded; hundreds of universities shut down for the semester. Scores of thousands of demonstrators poured into D.C. Buses, end-to-end, circled the White House. U.S. troops were moved into the basement of the Executive Office Building.

Today, there is absurd media talk of removing the president through impeachment or invocation of the 25th Amendment.

If the House votes impeachment, is the Senate going to hold a trial in 12 days to put Pence in the Oval Office? As for removing Trump through the 25th Amendment, this would require a declaration by Vice President Pence and half of the Cabinet that Trump is unfit to finish out a term that ends in two weeks. Not going to happen.

But undeniably, the events of Wednesday are going to split the Republican Party. And what does the future of that party now look like?

After Trump leaves the presidency, he will not be coming back. The opposition to him inside the GOP would prevent his nomination or would defect to prevent his reelection were he nominated again.

Yet, the size and strength of Trump's movement is such that no Republican candidate he declares persona non grata could win the nomination and the presidency.

Trump's supporters are today being smeared and castigated by the same media who lionized the BLM and antifa "peaceful protesters" who spent their summer rioting, looting, burning and pillaging Minneapolis, Milwaukee, Portland, Kenosha, Louisville and scores of other cities.

The Trumpists have been demonized before. They are used to this. And whatever their sins, disloyalty and ingratitude to the man they put in the presidency is not one of them.

Wednesday was a bad day for America, but it was not the Reichstag fire.