Why the Left Cannot Let Go of Jan. 6 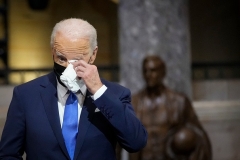 President Joe Biden wipes his eyes as Vice President Kamala Harris delivers remarks on the one year anniversary of the January 6 attack on the US Capitol. (Photo by DREW ANGERER/POOL/AFP via Getty Images)

That was the headline over the editorial of 1,000 words in The New York Times of Sunday last.

On first read, I thought the Times was conceding its obsession and describing its mission. For the editorial began by bewailing yet anew the "horrifying" event, "the very real bloodshed of that awful day," the "once-unthinkable trauma."

Still, a year later, said the Times, "the Republic faces an existential threat," as the "Capitol riot ... continues in statehouses across the country, in a bloodless, legalized form that no police officer can arrest and that no prosecutor can try in court."

"We should stop underestimating the threat facing the country. ... (our) democracy ... is in grave danger."

What the Times is saying is that the electoral reforms being enacted democratically in red states — requiring voter IDs, for example, and subject to judicial review — are a Republican continuation of the Capitol riot.

Why cannot our liberal media let it go? Why does the distortion and hysteria about Jan. 6 seem to grow with each retelling?

Now, undeniably, as I wrote in a column the next morning, Jan. 6 was "The Worst of Days for Trump & Trumpists."

"The worst of the day's events for Trump came when a segment of a friendly crowd of 50,000 he just addressed concluded its march down the Mall to the U.S. Capitol by smashing its way into the building and invading and occupying the Senate and House chambers.

"Members of Congress were forced to flee and hide. A protester, an Air Force veteran, was shot to death by a Capitol cop. Vice President Mike Pence, who was chairing the joint session, was taken into protective custody by his Secret Service detail. Doors were broken open. Windows were smashed, and the building was trashed ...

"What Americans watched was a mob occupation and desecration of the temple of the American Republic." I added, "And the event will be forever exploited to discredit not only Trump but the movement he led and the achievements of his presidency."

That last line understated what an obsession Jan. 6 has become for the nation's establishment and media elite.

The left cannot let go of Jan. 6. Indeed, it has fixated upon, exploited and exaggerated the riot to discredit and destroy the Trump presidency in the history books and to prevent Donald Trump from ever running or being elected president again.

Though Trump was exonerated by the Senate of the impeachment charge brought by Nancy Pelosi's House, the House select committee wants to try Trump again and again in the court of public opinion and wants President Joe Biden's Department of Justice to find some crime with which to charge and convict him.

There are other reasons the left cannot let go of Jan. 6.

Democrats have no other issue on which to run this November.

The Biden presidency has produced an uninterrupted string of disasters: the Afghanistan withdrawal debacle, the Texas border crisis, inflation, an explosion of gun violence and murders setting records in Democrat-run cities, failure to produce an adequate federal response to the delta and omicron waves of COVID-19.

Again, Jan. 6 was a riot, involving assaults on Washington and Capitol cops and the disruption of a formal congressional procedure to validate the electoral vote victory of Joe Biden.

But was Jan. 6 really the planned coup, the terrorism, the sedition, the armed insurrection, the attempt to overthrow the U.S. government?

Was Jan. 6 really comparable to Pearl Harbor and 9/11, during each of which 3,000 Americans went to their deaths in an hour's time and major wars followed — as Vice President Kamala Harris said yesterday?

If so, why, a year after Jan. 6, 2021, has no one been charged with inciting a rebellion, sedition, treason, armed insurrection, plotting a coup, or a takeover of the government of the United States?

Thus far, all the charges prosecuted and punished are consistent with a riot, which is what Jan. 6 was. Comparisons of this three-hour mob action to Pearl Harbor and 9/11 are almost sacrilegious.

Was that QAnon shaman occupying the chair in the Senate chamber really the moral equivalent of Mohamed Atta ramming an airliner into the World Trade Center or Adm. Isoroku Yamamoto plotting the Dec. 7 surprise attack on Pearl Harbor?

Another reason for the left to paint up the horror of that day is that the perpetrators of Jan. 6 were not the radical left who battled cops and burned and looted Seattle, Portland, Milwaukee and scores of other cities in the aftermath of George Floyd's killing.

They were the "deplorables" of Trump, the populists of the American right, against whom any slander is justified.

Question: If the left is so terrified of Trump it feels it must prevent him from even running again, by imposing a criminal conviction, what does that say about the left's belief in American democracy?

What does that tell us about the left's trust in the people?