Where Does NATO Enlargement End? 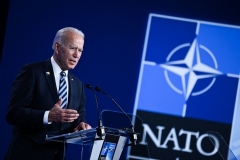 President Joe Biden speaks after the NATO summit in Brussels, on June 14, 2021. (Photo by BRENDAN SMIALOWSKI/AFP via Getty Images)

After the Berlin Wall fell in 1989 and the Warsaw Pact dissolved, the breakup of the USSR began. But the dissolution did not stop with the 14 Soviet "republics" declaring their independence of Moscow.

Decomposition had only just begun.

Transnistria broke away from Moldova. South Ossetia and Abkhazia seceded from Georgia. Chechnya broke free of Russia but was restored to Moscow's control after two savage wars. Crimea and the Donbass were severed from Ukraine.

Besides these post-Cold War amputations, assisted by Russia, what do Ukraine, Moldova and Georgia have in common?

All seek admission to NATO, and with it Article 5 war guarantees that oblige the United States to wage war against Russia to restore their sovereignty and territorial integrity if attacked.

It is easy to understand why these nations would want the U.S. obligated to fight on their behalf. What is not understandable is why the U.S. would issue such war guarantees. Why would we commit to risk war with a nuclear-armed Russia on behalf of nations no one has ever regarded as vital interests of the United States of America?

Consider how many nations have been admitted to NATO, and thus received U.S. war guarantees, after 1991.

These 14 newest members of NATO represent an expansion of U.S. war commitments riskier in ways than the original creation of NATO, when we were obligated to defend 10 nations of Western Europe.

Still, further NATO expansion may be in the cards.

As mentioned, Georgia and Ukraine are looking to join NATO and have the U.S. thereby obligated to fight Russia in their defense. Two other nations, Sweden and Finland, are talking of abandoning their traditional neutrality for NATO membership and U.S. war guarantees.

Bosnia and Herzegovina is also a candidate member of NATO. Its capital is Sarajevo, where an assassin's bullet fired in 1914 killed the Austrian archduke, an incident that led directly to the First World War.

Mikhail Gorbachev, at the end of the Cold War, reportedly told U.S. Secretary of State James Baker that Russia would agree to unification of East and West Germany if the U.S. would guarantee that NATO would not be moved further east.

Baker is said to have told Gorbachev, "Not one inch."

Whatever the truth, can we not understand why a Russian nationalist like Vladimir Putin would feel his country was being corralled and imperiled, if a NATO alliance created to contain Russia had lately added 14 members, most of which were former allies or republics of the USSR?

As The New York Times editorialized on Monday:

"Mr. Putin's concerns cannot be entirely dismissed. Were Ukraine to join NATO, the alliance would then have a 1,200-mile land border with Russia, a situation no major power would abide, no matter how loudly the Atlantic alliance claims to be purely defensive."

Here is the precise language of Article 5.

"The Parties agree that an armed attack against one or more of them ... shall be considered an attack against them all and consequently they agree that, if such an armed attack occurs, each of them ... will assist the Party or Parties so attacked by taking forthwith ... such action as it deems necessary, including the use of armed force, to restore and maintain the security of the North Atlantic area."

Friday, Secretary of State Antony Blinken said, "NATO never promised not to admit new members; it could not and would not."

But this is nonsense. There is no requirement that the U.S. admit to NATO any or all nations that apply for admission.

For whatever reasons we choose, we can veto any applicant. And avoiding war with Russia might constitute one of those reasons.

With NATO's continuous post-Cold War expansion into Central and Eastern Europe, America has to ask: If the risk of war with Russia grows with each new member on its borders admitted to NATO, why are we doing this? Is there no red line of Putin's Russia we will not cross?

Do we believe Putin will indefinitely accept the encirclement and containment of his country by nations united in an alliance created to keep Russia surrounded?

Presidents Harry Truman, Dwight Eisenhower, John F. Kennedy, Lyndon B. Johnson, Richard Nixon, Gerald Ford, Jimmy Carter and Ronald Reagan disagreed often but did agree on this: U.S.-NATO war guarantees stopped at the Elbe. Beyond the river in Germany, we battled the USSR with weapons of diplomacy, politics and economics, not weapons of war.

How would we have reacted if, after losing the Cold War, we were treated to Russian warships on Lake Ontario and Moscow giving Canada war guarantees?