Is Victory for Ukraine Worth Risking Nuclear War? 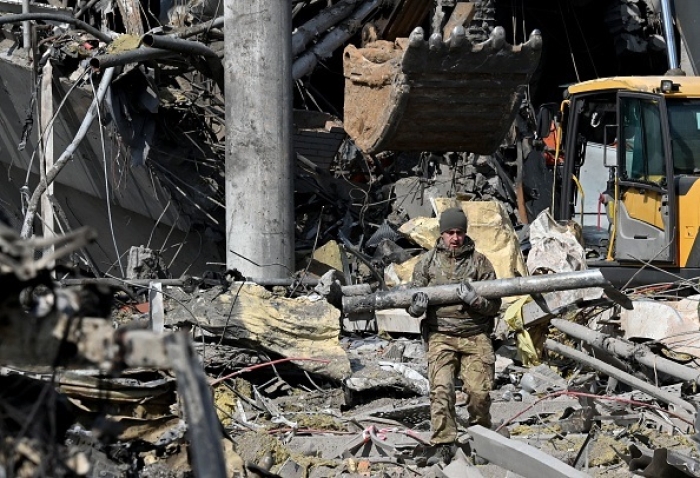 A Ukrainian serviceman carries a rocket fragment from a blown-up building in Kyiv on March 24, 2022. (Photo by SERGEI SUPINSKY/AFP via Getty Images)

During the 70 years that the Soviet Union existed, Ukraine was an integral part of the nation.

Yet this geographic and political reality posed no threat to the United States. A Russia and a Ukraine, both inside the USSR, was an accepted reality that was seen as no threat for the seven decades that they were united.

Yet, today, because of a month-old war between Russia and Ukraine, over who shall control Crimea, the Donbas and the Black and Azov Sea coasts of Ukraine, America seems closer to a nuclear war than at any time since the Cuban missile crisis of 1962.

Why? Time to step back and reflect on what is at stake.

Exactly what threat does Russia's invasion of Ukraine present to us that is so grave we would consider military action that could lead to World War III and Russia's use of battlefield nuclear weapons against us?

Russian President Vladimir Putin has repeatedly hinted at the use of such weapons, should NATO intervene in the Ukraine war and Russia face defeat, or in the event of an "existential" threat to the Russian nation.

We hear from our moral elites that morality commands us to intervene to save the Ukrainian people from the ravages of a war that has already taken thousands of Ukrainian lives.

But what would be the justification for U.S. military intervention in Ukraine, absent a congressional authorization or declaration of war?

Consider. The year the Liberal Hour arrived in America with the New Deal, 1933, a newly inaugurated Franklin D. Roosevelt formally recognized Joseph Stalin's murderous regime as the legitimate government of a Russia-led USSR.

FDR met personally with Soviet Foreign Minister Maxim Litvinov even as the Holodomor, the forced starvation of Ukrainian peasants and small farmers, the kulaks and their families, was far advanced.

Walter Duranty, the New York Times reporter in Moscow, won a Pulitzer for covering up that crime of the century with its estimated 4 million dead.

The question remains: When did the relationship between Russia and Ukraine become a matter of such vital interest to the U.S. that we would risk war, possible nuclear war, with Russia over it?

How did we get here?

We got here by exploiting our Cold War victory as an opportunity to move NATO, our Cold War alliance, into a dozen countries in Central and Eastern Europe, up to the borders of Russia. Then, we started to bring Ukraine into NATO, the constituent republic of the old Soviet Union with the longest and deepest history with Mother Russia.

Thus, while Putin started this war, the U.S. set the table for it.

We pushed our military alliance, NATO, set up in 1949 to contain and, if necessary, fight Russia, 1,000 miles to the east, right into Russia's face.

In the 1930s, when Britain's Lady Astor was asked if she knew where Hitler was born, she answered: "Versailles."

At the Paris Peace Conference of 1919, which produced the Versailles Treaty, millions of Germanic peoples and the lands they had inhabited were severed from German rule and distributed to half a dozen nations across Europe.

When we get back on our feet, we will take back all that we have lost, said Gen. Hans von Seeckt of the German General Staff.

We hear warnings that if Russia uses chemical weapons in Ukraine, NATO will react militarily. But if no NATO ally is attacked, why would NATO respond to a Russian attack on Ukraine?

Though outlawed today, chemical weapons were used by all the major participants in World War I, including the Americans.

As for atomic weapons, only Americans have used them.

The Ukrainian war, now a month old, has demonstrated the utility of nuclear weapons. Putin's credible threat to use them has caused the U.S. and NATO to flatly refuse Kyiv's request to put a no-fly zone over Ukraine.

And as Russia's threat to use nuclear weapons has deterred NATO from intervening on Ukraine's side in this war, other nations will not miss the message: Possession of nukes can deter even the greatest nuclear powers.

The longer this war goes on, the greater the suffering and losses on all sides. Thousands of Ukrainian soldiers and civilians are already dead, with 10 million uprooted from their homes, a third of that number having fled into neighboring states of Eastern Europe.

The longer the war goes on, the greater the likelihood Putin resorts to indiscriminate bombing and shelling to kill off the resistance, and the greater the possibility that the war expands into NATO Europe.

Meanwhile, in the secure American homeland, 5,000 miles from Kyiv, there is no shortage of foreign policy scholars beating the drums for a "victory" over Putin's Russia and willing to fight to achieve that victory — right down to the last Ukrainian.