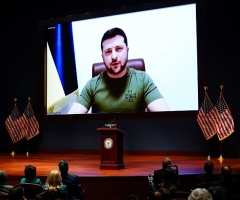 "It's time to meet, time to talk ... time to restore territorial integrity ... for Ukraine," said President Volodymyr Zelensky on Saturday.

Zelensky added that the need to negotiate was even greater for Moscow. "Otherwise, Russia's losses will be so huge that several generations will not be enough to rebound."

Still, Russian President Vladimir Putin appears less pressured to meet and talk. What does this tell us?

Zelensky does not believe further fighting will benefit Ukraine as much as it will cost his country. And he wants the war over.

The Russian president began the invasion of Ukraine with Crimea already annexed and the enclaves of Luhansk and Donetsk having already declared their independence of Kyiv.

Since the invasion began, however, Putin's forces have besieged but not taken Ukraine's capital, Kyiv, or second largest city, Kharkiv.

Yet, Russian troops are now in Mariupol on the Sea of Azov, having completed a land bridge from Russia through the Donbas to Crimea and, from there, halfway to Odessa, the last major Ukrainian port on the Black Sea.

While the Ukrainian army and citizens have put up fiercer resistance than was anticipated in Moscow, Russia is not losing this war.

He has not captured Kyiv or Kharkiv, but he has expanded the Russian-controlled territories of Donetsk, Luhansk and Crimea that he had at the start of his invasion.

While Russia's costs and casualties have been far greater than was anticipated, Putin has added to the Ukrainian lands he held when the war began. And Mother Russia has not lost an inch of land in this war.

"How does this thing end?" Gen. David Petraeus famously asked on the road to Baghdad.

No political solution appears more likely than a new partition of Ukraine, with lands east of the Dnieper River and along the coasts of the Sea of Azov and the Black Sea being ceded to Moscow, and the west of Ukraine being declared a neutral nation like Austria or Finland in the Cold War.

The problem with this probable outcome is that Zelensky has ruled out any territorial concessions or land transfers from Ukraine to Russia. And he seeks to "restore," not to make permanent, the 2014 amputations of Crimea and the Donbas.

The "territorial integrity" of Ukraine is the crucial issue in ending this war.

And it is precisely here where it appears impossible for both sides to come to terms.

The one issue on which both parties will likely agree in any peace settlement is the issue that should have been agreed to — to prevent the war: a formal declaration by Kyiv that it will never join a NATO alliance created to contain Russia and, if necessary, defeat Russia in a war.

A frustrated and enraged President Joe Biden has taken to calling Putin a "killer," a "murderous dictator" and a "war criminal" who has launched an "immoral war" — comments the Kremlin calls "unforgivable"

Such rhetoric would seem to rule out any role for U.S. diplomacy in negotiating the end to this war. Other nations — Israel, Turkey, France, Germany — have maintained regular relations and constant contact with Putin, who sits and broods atop the world's largest nuclear arsenal.

Consider the moral dilemma the U.S. has put itself in.

Our president says Russia is led by "a war criminal," conducting an "immoral" war in which deliberate atrocities are committed at hospitals, schools, kindergartens and art theaters.

Yet, the U.S. and NATO will not provide weapons to Ukraine, including secondhand MiGs, that might cause Russia to retaliate against us or NATO or risk World War III or risk Russia's use of tactical atomic weapons.

Because, pillaged and persecuted though Ukraine may be, it is not a member of NATO.

If Latvia, however, with 5% of Ukraine's population, is encroached upon, we will engage Russia militarily, and to hell with the risk of World War III or Russia's possible retaliation with atomic weapons.

In war, the moral is to the material as three is to one, said Napoleon. Unfortunately, what George Bernard Shaw said cynically also appears to be true: In war, God is on the side of the big battalions.

Zelensky probably cannot survive signing away the title to any Ukrainian land, be it Crimea or the Donbas. And Putin likely cannot survive not bringing home new territory from a Russian "victory."

Again, perhaps the one issue on which almost all now agree is that Ukraine renounce its right to join the NATO alliance.