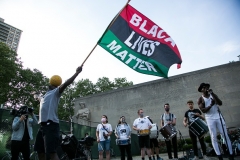 People mark the first anniversary of George Floyd's death at Cadman Plaza Park on May 25, 2021 in New York City. (Photo by Pablo Monsalve/VIEWpress via Getty Images)

According to Gallup, on the issue of crime, President Joe Biden is 18 points underwater. While 57% of Americans disapprove of how he is handling crime, only 39% approve.

Biden's dismal rating was recorded before the verdict came in the Kyle Rittenhouse trial — not guilty on all five counts — a verdict Biden declared had made him "angry."

Biden's rating also came before career criminal Darrell Brooks, free on $1,000 bail after running over his girlfriend, drove his Ford Escape into the Waukesha Christmas parade, killing six and injuring 60.

It came before the guilty verdicts came in against the three white men accused of murdering Ahmaud Arbery, the Black jogger, in Georgia.

Race never came up during Rittenhouse's time on the witness stand. And nothing in his background suggests any link to "white supremacists," as was insinuated by Biden, who has made no apology.

But what these incidents, involving killings with racial connotations, portend is that crime, race, law and order will be blazing issues in 2022 and 2024. And as of now, Biden and his Democratic Party are not on the side of America's majority.

The latest statistics on homicide and murders for 2021 seem to guarantee that this mega-issue remains front and center.

A day before Thanksgiving, The Washington Post reported that Washington, D.C., had recorded its 200th homicide this year, surpassing last year's total five weeks before this year's end. Homicides in 2020 were up 30% from 2019.

Though Baltimore has a smaller population than D.C., there have been 300 killings there this year, half again as many as in D.C.

In Philadelphia, America's sixth most populous city, there have been 503 victims of homicides thus far in 2021, a new record.

Who is doing all this shooting, knifing and killing on the savage streets of our great cities, and who are the principal victims?

"A black New Yorker is roughly 50 times as likely to commit a shooting as a white New Yorker. Blacks were 63.4% of murder suspects; whites, 6.3%. (That white share of homicide suspects represents domestic violence incidents, not street crime.)"

Bottom line: Disproportionately, the perpetrators, the shooters and the killers in America, are Black. As are their victims. If Black Lives Matter wants to preserve Black lives, they should look to their own communities because that is whence almost all of the killers come.

Indeed, of all of the Black folks who will have died of homicide or murder in D.C., Baltimore, Philly and New York this year, how many will have been shot or stabbed by Proud Boys, Three Percenters, Oath Keepers, white vigilantes, white supremacists or rogue white cops?

2022 and 2024 could prove to be a political rerun of the mid-'60s. Then it was that "law and order," a slogan liberals called code words for racism, helped propel conservatives to preeminence in the GOP and thence to national power.

And between then and now, the similarities are many.

Then, there were the riots in Harlem and Watts in 1964 and 1965, Newark and Detroit in 1967, and D.C. and 100 other cities after the killing of Dr. Martin Luther King Jr. in 1968. During those years, there was also a national explosion in violent street crime.

Then came the anti-war protests and riots, which kept Lyndon B. Johnson locked up in the White House in his final days in 1968 and tore apart the Democratic convention in Chicago.

Today's Democratic Party is associated with defunding the police, ending cash bail for arrested felons, emptying prisons, and embracing the BLM and antifa "social justice protests" of 2020 that often involved looting, arson and assaults upon police.

As for Biden, the 2021 model bears little resemblance to the tough-talking Delaware senator who pushed the principal anti-crime bill of the 1990s and explained his approach in a 1994 Senate speech:

Today, the progressive wing of his party prevents Biden from taking that kind of stand. But that is what his country is calling for.