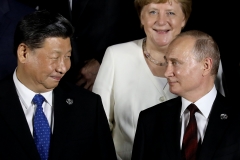 German Chancellor Angela Merkel stands behind Russian President Vladimir Putin and Chinese President Xi Jinping as they arrive to pose for a group photo before a cultural event at the Osaka Geihinkan in Osaka Castle Park during the G20 Summit in Osaka on June 28, 2019. (Photo credit: DOMINIQUE JACOVIDES/AFP via Getty Images)

What are Vladimir Putin and Xi Jinping up to?

In recent days, Russian tanks, artillery, armor, trucks, and troops have been moving by road and rail ever closer to Ukraine, and Moscow is said to be repositioning its 56th Guards Air Assault Brigade in Crimea.

Military sources in Kyiv estimate there are now 85,000 Russian troops between six and 25 miles from Ukraine's northern and eastern borders.

"I have real concerns about Russia's actions on the borders of Ukraine. There are more Russian forces massed on those borders than at any time since 2014 when Russia first invaded," said Secretary of State Antony Blinken on Sunday's "Meet the Press." Blinken added this warning:

What "costs" and what "consequences" were left unstated.

Earlier, Biden personally assured President Volodymyr Zelensky of America's "unwavering support for Ukraine's sovereignty and territorial integrity in the face of Russia's ongoing aggression in the Donbass and Crimea."

What does that mean?

When Putin was a young KGB officer, the Black Sea was a virtual Soviet lake, dominated in the west by Warsaw Pact members Bulgaria and Romania, and on the north and east by the USSR. Turkey occupied the south bank.

Today, three of the six countries that front on the Black Sea — Bulgaria, Romania, and Turkey — are NATO members. Two of the others, Ukraine and Georgia, openly aspire to become members of NATO.

If Russia feels a sense of loss and forced isolation, who can blame them?

The transparency of the Russian military buildup suggests that it is more of a message to the U.S. and NATO than any preparation for an invasion.

Putin seems to be saying: Ukraine's admission to NATO or a stationing of U.S. or NATO forces in that country would cross a red line for Russia. And we will not rule out military action to prevent or counter it.

The record suggests that Putin is not bluffing.

We have been here twice before.

In 2008, when Georgia invaded South Ossetia, a province that had broken free of Georgia in the 1990s, Putin sent troops into South Ossetia, drove the Georgians out, and then invaded Georgia and occupied part of that country as an object lesson.

And though the U.S. had regarded Georgian President Mikheil Saakashvili as a friend and Georgia as a potential NATO ally, George W. Bush did nothing.

Again, in 2014, when a U.S.-backed coup overthrew the elected and pro-Russian regime in Kyiv, Putin occupied and annexed Crimea and assisted pro-Russian rebels in the Donbass in breaking free of Kyiv's control.

In short, when it comes to Ukraine, Russia has demonstrated that it has its own red lines, which it will back up with military action.

The U.S. and NATO, however, have shown repeatedly that while they will give moral support and provide military aid to Ukraine, they are not going to fight Russia over Ukraine, or to wrest Crimea or the Donbass from Putin's control.

A similar test is taking place in the South and East China seas.

Also on Sunday's "Meet the Press," Blinken was asked if the United States would fight to defend Taiwan, which is being harassed and threatened by Xi Jinping's China, which claims the island as its sovereign national territory.

What we've seen, and what is of real concern to us, is increasingly aggressive actions by the government in Beijing directed at Taiwan, raising tensions in the Straits. And we have a commitment to Taiwan under the Taiwan Relations Act...all I can tell you is it would be a serious mistake for anyone to try to change the existing status quo by force.

Since Biden's presidency began, China has been sending military aircraft, fighters, and bombers, into Taiwanese air space, circumnavigating the island with warships, and openly warning that any declaration of independence by Taipei would mean war with Beijing.

But U.S. policy in both cases seems to be one of "strategic ambiguity," leaving the issue open as to what we would do.

A question arises: Are Putin's Russia and Xi's China, with their advantages of geographic proximity, threatening military action to jointly test the resolve of the Biden administration, and colluding to do so — one in Ukraine, the other in the South and East China Seas?

Recent actions by Putin and Xi make the questions no longer academic.