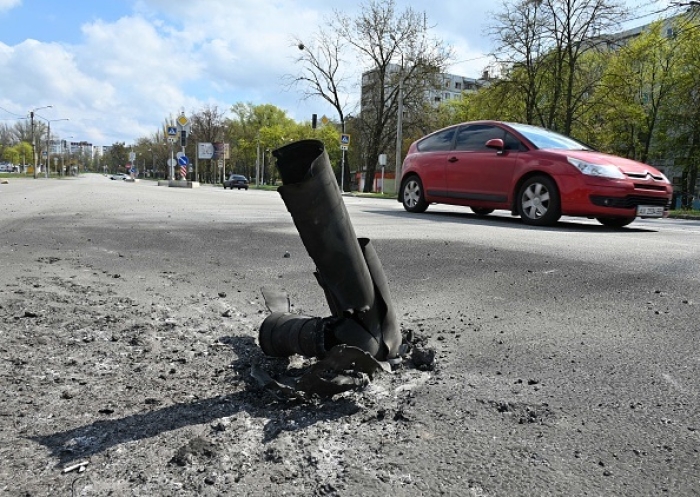 A car passes a missile embedded in a residential area after recent Russian shelling in the northern outskirts of Kharkiv, on April 21, 2022. (Photo by SERGEY BOBOK/AFP via Getty Images)

Asked if the U.S. should send troops to fight beside the Ukrainians, Sen. Chris Coons, D-Del., said Sunday the time may have come.

Russian President Vladimir Putin "will only stop when we stop him," said Coons.

"We are in a very dangerous moment where it is important that ... we in Congress and the administration come to a common position about when we are willing to go the next step and to send not just arms but troops to the aid in defense of Ukraine."

"If the answer is never, then we are inviting another level of escalation in brutality by Putin."

In response, the White House affirmed President Joe Biden's declaration that U.S. troops are not going to be sent to fight Russians in Ukraine, as this would open the door to World War III.

Said Biden last month: "The idea that we're going to send in offensive equipment and have planes and tanks and trains going in with American pilots and American crews, just understand ... that's called World War III, OK? Let's get it straight here, guys."

Biden added, "We will not fight the third world war in Ukraine."

Since Biden made these remarks, however, the red line against direct U.S. aid to the Ukrainian military has shifted, though the prohibition against the introduction of U.S. troops and air power has remained.

As U.S. forces fighting and killing Russians in Ukraine would ignite a U.S.-Russia war, which could escalate to nuclear war, we are not going to take that first step and risk the security and survival of our country, even if our staying out of this two-month war means the defeat of Ukraine.

Call it the Eisenhower position.

In 1956, President Dwight Eisenhower refused to use U.S. forces to intervene to halt Russian tanks from crushing the Hungarian Revolution that had risen up against Soviet occupation and rule.

Ike was unwilling to cross the Yalta line dividing Europe and chose to let the Hungarian Revolution fail rather than potentially ignite a war in which our own soldiers and nation would be at risk.

Ike literally put America first, ahead of the Hungarians.

Where does Biden's refusal to follow Coon's urgings leave the rival belligerents in this Ukraine-Russia war?

Putin has suffered a series of setbacks since his invasion began.

He has failed to capture any of the three largest cities in Ukraine: Kyiv, the capital, or Kharkiv, the second largest city, or Odessa, the third largest city and principal port on the Black Sea.

Putin suffered a humiliating defeat and retreat in the battle of Kyiv and has lost a fourth of the forces with which he started the war.

The flagship of Russia's Black Sea fleet, the cruiser Moskva, has been sunk, reportedly by Ukrainian anti-ship missiles.

Yet Putin has had his successes as well.

If Mariupol, Ukraine's major port on the Sea of Azov falls, as is expected, Putin will have his "land bridge" from Russia to Crimea. North of Crimea and in the west of Luhansk and Donetsk, Putin has also added to the lands he has held since 2014.

Russia's capture and annexation of the Donbas could be called a victory by Putin. Capture of Kharkiv or Odessa, the latter of which would give Putin control of the entire Black Sea coast of Ukraine, making Kyiv the capital of a land-locked country, would constitute a triumph.

Which brings us to the debate now shaping up in the USA.

Neocons and war hawks are taking the position that the visible defeat of the Russian army and its expulsion from Ukraine, and Putin's humiliation and ouster, must be America's goals. And these goals should be nonnegotiable. Failure to achieve these ends, it is said, would amount to a defeat for NATO and the United States.

The problem with this victory scenario?

Putin has sent many signals that before he accepts the defeat of his army and country and his own removal and trial as a "war criminal" who engaged in "genocide," he will use battlefield nuclear weapons from his arsenal of 6,000 such weapons to win the war.

Dissenters believe that Putin may not be bluffing, that an early and negotiated end to this war may be necessary to avoid a wider conflict that could escalate into World War III.

But, as ever, they are being charged with timidity and cowardice and letting pass a historic opportunity to administer to authoritarian Russia the defeat it invited with this invasion and that it richly deserves.

Yet, recall: To avoid war with Russia, President Harry Truman refused to breach Joseph Stalin's Berlin Blockade. Eisenhower let the Hungarian revolution be drowned in blood and told the Brits, French and Israelis to get out of Egypt. President John F. Kennedy let the Berlin Wall go up. President Lyndon B. Johnson let the Prague Spring be crushed by the Warsaw Pact.

The sooner this war ends, the better for all.