Are Democrats Kicking Away Their Future? 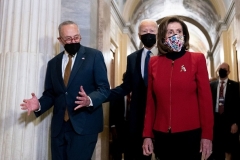 Not so long ago, Democrats seemed the party of the future.

"Inevitable!" predicted some pundits, for demography is destiny.

Moreover, in 2020, Democrats, who had won the popular vote six times in seven presidential elections, swept the popular vote again, by 6 million ballots. And they captured both houses of Congress.

The future did seem to be theirs.

Progressives dominated the major culture-forming institutions of society — academia, the media, Hollywood — not to mention the vast bureaucracy of America's national administrative state.

One sensed a confidence among Democrats that one or two more elections and the nation, like the California of Ronald Reagan, would turn irretrievably blue.

What happened to the dream?

First, President Joe Biden's withdrawal from Afghanistan, after 20 years of war, had about it the aspect of Saigon '75.

The rout of our Afghan allies and humiliation of our departure delivered an irretrievable blow to Biden's reputation for competence.

There followed the visible failure of the administration to defend and secure America's southern border as 2 million migrants from all over the world poured across in Biden's first year.

Then came a surge in crimes of violence, shootings and murders in major cities. And people recalled that our media and political elites who had cheered on the Black Lives Matter protests and excused the riots after George Floyd's death had echoed the BLM-antifa calls to "defund the police!"

Also, suddenly, an inflation rate not seen in 40 years was back, driving up the price of gasoline and groceries and everything else at a rate of 7.5%.

Then came news that the U.S. trade deficit, which helped to propel former President Donald Trump into the White House, was at an all-time record of over $1 trillion, and the national debt had crossed the $30 trillion mark, exceeding the entire U.S. GDP.

Late in Biden's first year, COVID-19 reached its omicron stage with infections, hospitalizations and deaths suddenly exploding again to record numbers in a pandemic deep into its second year.

Then, there were the manifestations of cognitive decline in the president, seemingly with each new televised appearance.

Unable to defend America's borders, control the surge in violent crime or cope with an inflation unseen in 40 years, Biden began a steady slide in the polls to where, currently, all have him underwater and some put his approval below 40%.

That a crisis for the party may be in the cards for this fall has not been lost on Democratic leaders. Fully 30 members of Speaker Nancy Pelosi's majority in the House have announced that they will be retiring and will not run again in 2022.

The latest bad news came out of the Golden State, where three progressives on San Francisco's school board were recalled in an election where more than 7 in 10 voters cast ballots to be rid of them.

The problem for Democrats is that the issues for which the three were recalled are the issues dividing communities all across America:

Are America's elite schools whose student bodies are chosen by academic performance and test scores consistent with the progressives' concept of racial equity? Or should student bodies of those elite schools be mandated to mirror the ethnic and racial composition of the communities they serve?

How are issues of race, morality, sexuality and history to be taught in the public schools? Who decides what is to be taught?

The issue was elevated in Virginia last fall when former Gov. Terry McAuliffe, a favorite for reelection, blurted out during a debate with Republican Glenn Youngkin, "I don't think parents should be telling schools what they should teach." Virginia's parents buried McAuliffe's hopes.

The San Francisco school board also plunged into the culture wars by attempting to re-name 44 high schools, while purging the names of all four presidents on Mount Rushmore — George Washington, Thomas Jefferson, Abraham Lincoln and Theodore Roosevelt — as well as Paul Revere and Sen. Dianne Feinstein.

San Francisco's Lowell High School is one of the elite high schools that selects its student body on academic performance and test scores. And that student body has been heavily Asian American, who make up a far higher share of the student population than of the city itself.

This issue of Asians being overrepresented in elite high schools is replicated at Northern Virginia's Thomas Jefferson High, and in New York City at Stuyvesant and the Bronx School of Science.

Who gets into these schools and who does not and who decides pits the leaders of Black communities against those of Asian American communities and divides the Democratic Party on the lines of ethnicity and race.

Among other issues that have gone national are critical race theory, which teaches that, due to the systemic racism in American society, all whites are born oppressors, while Black Americans are from birth among the oppressed.