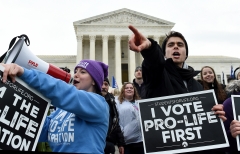 The city of Alexandria, Va. has canceled its planned commemoration of “National Day of Appreciation for Abortion Providers” on Thursday, March 10, after city leaders received considerable objections from pro-life activists.

“This proclamation has now been pulled from the agenda on Tuesday at my request,” Mayor Justin Wilson, a Democrat, said in a March 4 email, according to The Daily Wire.

In 1996, abortion activists chose March 10 to be National Day of Appreciation for Abortion Providers in memory of Dr. David Gunn, an abortion doctor who was slain on that day three years prior. It picked up via social media in 2017 when the Abortion Care Network launched its “#CelebrateAbortionProviders” campaign, which it says “has become an annual tradition of celebrating and appreciating abortion care providers.”

Typically, abortion providers such as Planned Parenthood spread the word about March 10.

The Daily Wire reported that the mayor acknowledged that there is “controversy associated with the provision of abortion services,” but insisted he was only trying to recognize health care workers for their efforts.

It’s disconcerting to see a city like Alexandria — located just outside Washington, D.C. — with its deep historical roots, publicly claim abortion is health care and view the celebration of abortion as a duty.

🚨 DISGUSTING: The Mayor of Alexandria, VA wants to make March 10 “Abortion Provider Appreciation Day.”
Abortionists poison and dismember human beings. It is wrong for Alexandria to celebrate acts of homicide, and deeply offensive to celebrate those who kill unborn children. pic.twitter.com/dkK39jjw9V

Virginia Gov. Glenn Youngkin, a Republican who took office in January, told The Daily Wire that he was “saddened and disappointed” that the proclamation had been considered.

“The far-left liberals continue to dominate the Democrat Party and remind everyone that they are completely out of touch with Virginia values,” he said.

Alexandria’s Catholic community spoke out against the proposed proclamation as well. The Basilica of St. Mary encouraged its parishioners to contact the City Council in protest. Bishop Michael Burbidge of the Catholic Diocese of neighboring Arlington, Va., released a statement that condemned the proclamation. He encouraged Alexandria residents “to express their opposition to this proclamation” and for everyone else in the diocese to “proclaim the Gospel of Life by word and example.”

The Rev. Alexander Diaz of the Queen of Apostles Church in Alexandria also spoke out against the city participating in a public celebration of abortion providers. Its website includes a link to a form to contact the City Council and complain.

In 2020, the Twin Cities in Minnesota — Minneapolis and St. Paul — both marked March 10 as “Abortion Providers Appreciation Day,” as did St. Louis.

It’s not clear whether those cities intend on celebrating abortion providers again in 2022, but at least for now, Alexandria has decided the backlash wasn’t worth it. The lesson for conservatives: Speak up. Your voices matter.