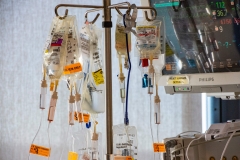 Late March marks the 17th anniversary of the court-sanctioned murder of Terri Schindler Schiavo. Under the order of a Florida judge who never bothered to visit her and an adulterous spouse-in-name-only who ranted "When is that b**** gonna die?" to one of Terri's nurses, American legal and medical authorities supervised the cruel, two-week-long starvation and dehydration of a profoundly disabled woman who was not terminally ill and who had an army of family members ready to care for her for the rest of her natural life.

Bobby Schindler, Terri's stalwart brother, penned a tribute to Terri this week as a reminder to those who have forgotten the family's landmark battle to save her life. "It was 1990, for those who do not remember, when Terri, at the age of 26, sustained a brain injury resulting from suspicious circumstances while home alone with her husband, Michael Schiavo," Bobby wrote. "Terri's brain injury affected her ability to swallow and therefore she needed a feeding tube to receive nourishment."

Michael Schiavo became Terri's court-appointed caretaker since she hadn't created a medical directive. But shortly after a nearly $1 million medical trust was established to provide for her long-term medical needs, he declared he wanted to end her life — and inherit the cash. Terri's family fought Michael Schiavo all the way to the Supreme Court and lost. Pro-life politicians tried to intervene, but the judicial deal was sealed, and Terri's death sentence was unstoppable.

What I will never forget are the feckless, callous corporate media lies about Terri and those who defended her. National outlets derided the Schindlers and attacked the "radical, anti-abortion, right-to-life Christian right" for casting doubt on medical experts who wrote Terri off as hopeless and falsely mischaracterized her as "brain-dead" or on "life support."

Here are the facts: As I reported in my 2005 column calling out the lying media liars at the time, Terri was on a feeding tube. A feeding tube is not a ventilator. Terri was breathing just fine on her own. She was capable of saying "Mommy" and "Help me." And as many of her medical caretakers and parents have argued, if given proper rehabilitation, Terri could learn to chew and swallow on her own as well. She was disabled, not brain-dead.

And that perturbed Michael Schiavo. Registered nurse Carla Sauer Iyer, who worked at the Palm Garden of Largo Convalescent Center in Largo, Florida, while Terri Schiavo was a patient there, testified in a sworn affidavit: "Throughout my time at Palm Gardens, Michael Schiavo was focused on Terri's death. Michael would say 'When is she going to die?' 'Has she died yet?' and 'When is that b**** gonna die?'"

When Terri's 39-page autopsy report was released a few months after her state-ordained murder, gloating propagandists concluded that it exonerated Michael Schiavo of allegations of abuse. "No trauma before Schiavo collapse," a typical headline blared. But on page four of the medical examiner's summary, what the report actually noted with regard to possible strangulation was this: "Autopsy examination of her neck structures 15 years after her initial collapse did not detect any signs of remote trauma, but, with such a delay, the exam was unlikely to show any residual neck findings." Indeed, the autopsy report refuted Michael Schiavo's widely disseminated claims in the media that she had an eating disorder or had suffered myocardial infarction. But if mentioned at all, news reports downplayed and buried those astonishing revelations (revelations which bore directly on Schiavo's credibility regarding his claim that Terri would have wanted to die).

With regard to Terri's alleged persistent vegetative state, most news articles inaccurately portrayed the report as supporting that diagnosis. But "it's always seemed to us that PVS isn't really a diagnosis; it's a value judgment masquerading as a diagnosis," Stephen Drake, research analyst for the disability rights group Not Dead Yet, commented. "When it comes to the hard science, no qualified pathologist went on the record saying she couldn't think or couldn't experience her own death through dehydration."

Diane Coleman, president and founder of Not Dead Yet, agreed. "The core issues remain the same. Protection of the life and dignity of people under guardianship, and a high standard of proof in removing food and water from a person who cannot express their own wishes. These are issues of great concern to the disability community — evidenced by the 26 national disability groups that spoke out in favor of saving Terri Schiavo's life over the past few years."

"The sooner we realize...that we are battling a systemic, radical, anti-life, anti-Christian value-system, the more we will understand it is now our urgent duty to defend the medically weak. If we don't protect them now, it will be impossible to protect our own families if and when the time comes to do so," Bobby Schindler warned this week. Terri's murder at the hands of a cabal of liars and grifters is more relevant than ever as Big Pharma, Big Government, Big Tech, and Big Media elites conspire to undermine medical autonomy in the age of COVID-19. As we have witnessed repeatedly over the past two years, the "Trust the Science" control freaks don't take kindly — and never have — to dissident families who dare question their authority.