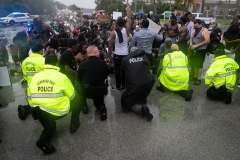 Police officers and demonstrators kneel together during a protest against police brutality and the recent death of George Floyd. (Photo credit: EVA MARIE UZCATEGUI/AFP via Getty Images)

You have done nothing wrong.

Rejecting collective guilt is not a crime. Refusing to acknowledge "white privilege" when you were born poor, or in a broken home, or with physical or psychological challenges, is not a crime. Embracing the historic American nation, instead of erasing it, is not a crime.

Do not let the media, Hollywood, academics, or politicians gaslight you. Stop internalizing lies. Who are the criminals? Who are the heroes? Who are the makers and keepers of peace? Who are the sowers and reapers of hate?

The Proud Boys, who have guarded their communities and country for the past three years, were the lone citizen soldiers in the battle against Antifa that no one else on the ground wanted to fight. The group and its leader, Gavin McInnes, have suffered greatly for trying to stop the violence now raging nationwide. McInnes has been deplatformed everywhere and falsely labeled a "white supremacist." Scores of Proud Boys of all colors have lost their jobs after being doxxed by Antifa vigilantes. Two Proud Boys are in prison, railroaded by New York Democrats, after a Kafkaesque trial in which the cop-hating Antifa "victims" who lured the Proud Boys into an October 2018 street brawl refused to press charges or testify.

Their crime? These unapologetic Americans stood on their feet, not on their knees.

Journalists and photographers who documented Antifa violence for the past three years, such as Andy Ngo, Chelly Bouferrache, and Brandon Brown in Portland, Ore., have endured physical assaults, death threats, and harassment. Many others have gone into hiding and suffer in silence.

Their crime? Exposing Antifa anarchy, standing eye to eye against their assailants, on their feet, not on their knees.

Working-class Irish, German, and Polish-American men of Fishtown, a northeast Philadelphia suburb, came together this week to prevent their neighborhood from being pillaged and burned in the name of "social justice" like the rest of the City of Brotherly Riots. They banded together outside the 26th police precinct, armed with bats and golf clubs, and faced down Black Lives Matter protesters who were there to taunt and provoke the cops.

Turn off CNN and tune into the facts on the ground. At least 25 Philadelphia cops have been hurt during mob violence this week. It's an all-out war on the thin blue line. At least 150 cops have been assaulted — four nearly murdered — in New York City as of Tuesday afternoon. Two Buffalo, New York law enforcement officers were run over late Monday night. In addition, 51 members of the U.S. Park Police were injured; a Cincinnati cop was grazed by a bullet aimed at his head; four St. Louis officers were shot; one retired St. Louis police captain was killed; a Las Vegas Metro cop was shot; and a federal officer was shot and killed in Oakland — all in the name of peace, tolerance, and reparations.

Yet, against this bloody and retributive backdrop, Democratic leaders in Philadelphia who have coddled looters all week condemned the peacekeeping Fishtown Brigade as a "mob" of "vigilantes."

Their crime? Standing tall on their feet, not on their knees.

"If you're going to destroy something that somebody worked so hard to build, well, you know what, maybe you should be put down," he told Fox 11 Los Angeles. "You walk through my door, you threaten my life, I'm aiming for the head."

Mendelson's crime? Standing muscle-bound and honor-bound on his feet, not on his knees.

Proud and good people hold their chins and guns up in a crisis. It is how Korean grocers responded when the police abandoned them during the Los Angeles riots in 1992. It is how armed small-business owners of all colors are now facing an onslaught of crazed, greedy, and evil barbarians hell-bent on destroying every enforcement bulwark that protects our civil society — from our borders to our neighborhoods to the White House.

Weakness is not strength. Confessing sins for which you bear no guilt is not noble. It makes me sick to my stomach to see virtue-signaling police chiefs kneeling before barking rioters calling them "pigs." I am nauseated by the sight of sobbing white people groveling for forgiveness before sadistic Black Lives Matter demagogues — as if this will appease the unappeasable. It will not and never will.

America, straighten your spines. Unbow your heads. No home or nation was ever saved by kowtowing to invaders or ransackers. Unless you are praying to God, get up off your knees.