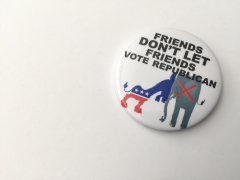 Featured is a pin bearing the likeness of both the Republican and Democrat party animals. (Photo credit: Patricia Marroquin/Contributor/Getty Images)

A few days ago, I spoke at an Asian hate crimes awareness event where my speech was received well enough that a liberal host invited me to be a guest on her radio show. I said great and we traded numbers. Later that day, she and I texted back and forth, and I sent her my official bio.

I’m guessing it was the word "conservative" somewhere in there that jumped out at her, but her next text read: I hate to ask this but are you a Trump supporter?  Yes, I am, was my simple reply. I was immediately disinvited from appearing on her show. She explained that Trump has contributed to the environment of hate currently surrounding Asians, and I was therefore guilty by association. My views, she said, didn’t “jive” with her show.

I respect her right to hold that viewpoint and have whomever she wants on her own show. But how is it productive moving forward when you cut off half the country because they supported a president you don’t “jive” with? Echo chambers are boring.

I’m not just calling out liberals; there are more than a few conservatives who refuse to engage on issues. I recently held a Juneteenth event in a Long Beach park – a happy, celebratory day with people of all ages, races, and genders in attendance. The Washington Examiner and Epoch Times both covered my stance, which broke away from some of the loudest voices on the conservative side. On the right, some are so angry and quick to label others RINOs for simply disagreeing on one minor issue. You won’t believe how many activists I have met that won’t work with people who are their natural partners because of some petty disagreement years back. How sad for the movement to be robbed of that synergy.

The bottom line is this sad reality. Both sides have many who are allergic to nuanced discussion. These people are also allergic to simply agreeing to disagree. This type of mentality has always made race relations worse. While I, myself, am highly politically involved and opinionated, I try to converse with open-minded people, because I, myself, am allergic to those who live life in one dimension. Those who only talk politics and/or those who judge others solely based on who they voted for in the last election, writing off someone’s entire existence based on that one attribute? I had always laughed at people like that, but now it’s becoming more prevalent and mainstream. It’s like making snap assumptions based on skin color. I prefer not to deal with these people, whether they’re Republican or Democrat.

My good friend Michael Manchester is at the complete opposite end of the political spectrum from me. I’m sure my Facebook memes make Michael cringe and I certainly disagree with Michael's. But guess what I do? I scroll right through. Last week we had a great doggie play date, because we have being devoted fur parents in common and we’re working together on an event against human trafficking. What we don’t do is harangue each other or get into endless debates on topics we disagree on. My good friend Lydia Hall, who is a cousin of a Democratic congresswoman and highly involved in many liberal causes, has been a dear friend for over a decade and we even worked together on issues like autism awareness. I have learned there are many issues where our differing points of views become an asset in the problem solving portion. But if we were being mousey and not talking about where we stand, nothing would be accomplished. This is the problem with the mainstream society: everyone tries too hard to please others; they miss opportunities to be real and to have rich discussions, even if no one comes to agreement. That process is a necessary solution in this modern day.

I have to call out the left and the right for the political atmosphere becoming so highly charged that average people are afraid to speak up. As an activist, speaking out loud and long is something I can never be afraid to do. Let’s be better. Smarter. More willing to build relationships with those you heartily disagree with. It doesn’t mean you compromise who you are…it means you are growing and learning.

Marc Ang (marc@aib2b.org) is a community organizer in Southern California and the founder of AsianIndustryB2B. He specializes in race relations and the minority conservative experience and his book “Minority Retort” will be released in late 2021.