Would You Stay and Fight for America? 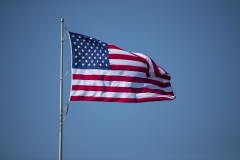 When Russia invaded Ukraine, laying waste to the country, the response of many Ukrainians awed and inspired the world -- Ukrainians rallied in support of their country, taking up arms as their lives were put on hold. Grandmas, school teachers, and people of all walks of life volunteered to join the Territorial Defense Forces (TDF). However, the same desire to stay and fight might not be true of many American citizens if they were put in a similar situation.

A recent poll from Quinnipiac asked whether respondents would "stay and fight or leave the country" if placed in the position Ukrainians are now in. A slim majority of 55% said they would stay and fight. The breakdown of the numbers is more discouraging. Among Democrats, 40% would fight while 52% -- a majority -- would flee. Similarly, more Americans aged 18 to 34 years old would leave (48%) than stay (45%). These numbers are more than a little disheartening.

Many Americans seem to have the attitude that our country has far too many problems to pay any attention to the rest of the world. Some even believe that we are no longer a good country, that we do not have anything to offer other nations in terms of values. This is a mindset embraced by both ends of the U.S. political spectrum. The Left cannot look past perceived racism, discrimination, and self-inflicted climate catastrophes. The Right sees a country that has lost its soul -- why should America intervene in world affairs if we allow the killing of millions of babies in the womb?

No nation is perfect; that is true. Yet, we should not seek to abandon the foundations of what is good just because we find flaws. As Americans we must not allow ourselves to fall into the same trap as the Cuban revolutionaries of the 1950s who joined Castro to fight Batista; they realized they had overthrown a monster but helped a bigger one rise in his place.

America's ills deserve to be addressed, but they aren't the defining characteristic of our country. The values that Americans have fought and died for time and again from the Revolutionary War to the Civil War to World War II include freedom from slavery and tyranny, representative government, and self-determination. By remaining rooted in a Bill of Rights that protects fundamental freedoms of religion, speech, press, assembly, and petition, and protecting citizens against unreasonable search and seizure, trial without indictment, and cruel and unusual punishment, America has nurtured a prosperous and peaceful society. These ideals -- not America's flaws -- define our country.

An underlying animosity for our society is reflected in the Quinnipiac poll. Simply stated, it is asking why stay and fight if America isn't worth fighting for?

American self-loathing is damaging not just for U.S. national security and the social fabric of our country, but for people around the world. Nigerian mothers of kidnapping victims think America has something to offer -- they beg for U.S. leaders to speak out. Hong Kong pro-democracy protestors believed America had something to offer -- they waved the American flag before the Chinese Communist Party suffocated the protests.

We must believe America still has something to offer.

In 1964, Ronald Reagan poignantly articulated the importance of America: "We'll preserve for our children this, the last best hope of man on earth, or we'll sentence them to take the last step into a thousand years of darkness." His words are as true now as they were then -- and we must believe it. America is worth preserving for ourselves, for those who will inherit it, and for those around the world longing for the freedom we take for granted.