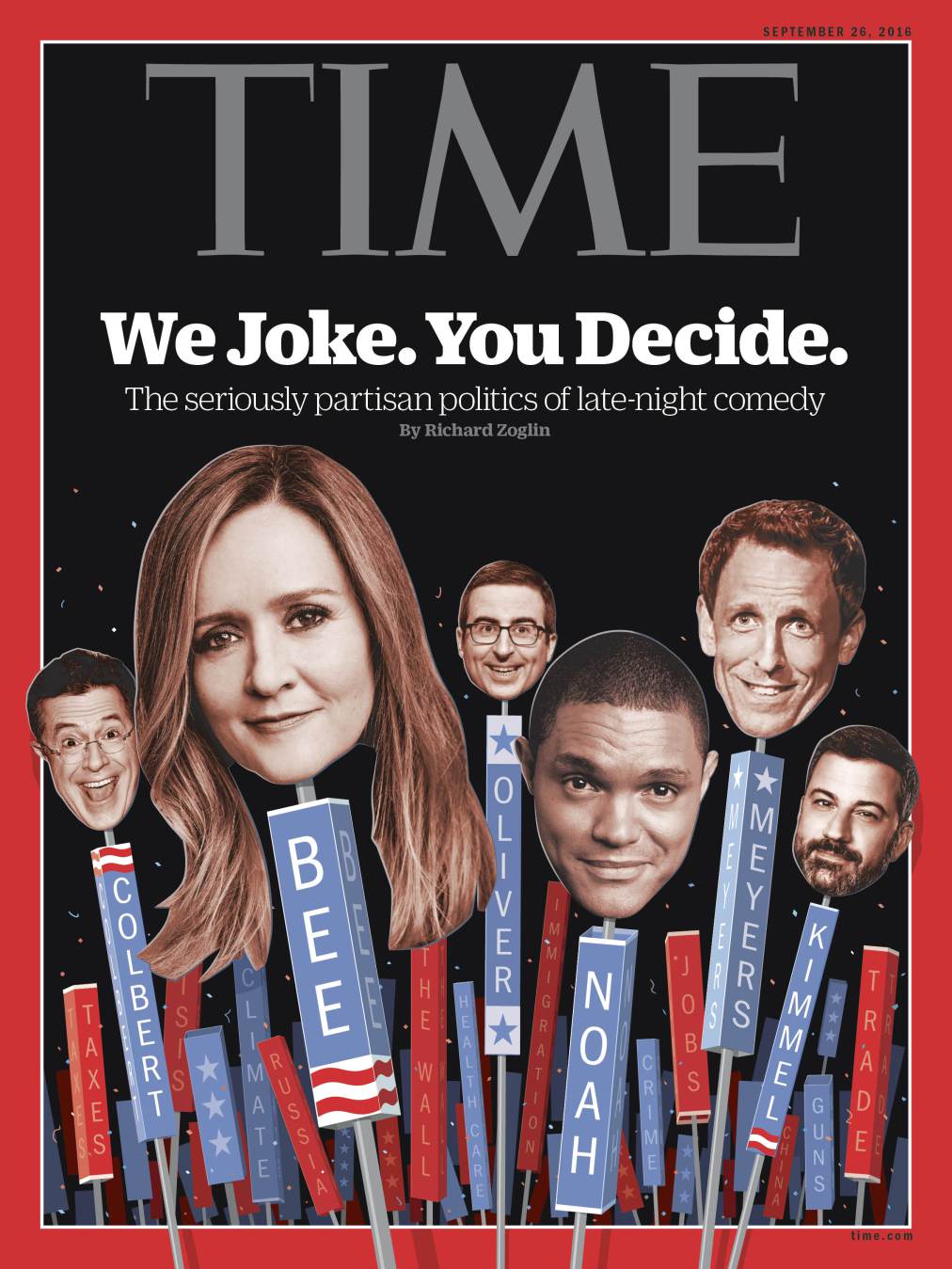 The Sept. 26 issue of Time magazine cover featured the heads of comedians Stephen Colbert, Samantha Bee, John Oliver, Trevor Noah, Seth Meyers and Jimmy Kimmel, and the headline "We Joke. You Decide." The allusion to the Fox News tagline was deliberate. The subheadline declared that they would report on "The seriously partisan politics of late-night comedy."

Finally, liberals are acknowledging what conservatives have claimed for years.

Inside, the headline was "The New Politics of Late Night." And writer Richard Zoglin began the article saying, "In a wild election with a ripe orange target, comics are ditching balance and taking sides." Zoglin started with a collection of Bee stingers, calling her description of the Republican convention a "poorly attended rage-athon of hemorrhoidal has-beens."

But just when you thought Zoglin was going to concede and celebrate the left-wing tilt of late-night TV, his analysis fell apart — as liberals' analyses normally do when they are called to analyze the obvious.

Zoglin quoted Bee saying that Jon Stewart "worked really hard to try to be nonpartisan." Baloney. But he also proclaimed that the departures of Stewart, David Letterman and Colbert's fake-Bill-O'Reilly brought "an unexpected and largely unappreciated payoff." The new comedians are shooting arrows "from the left flank" and have "triggered an extreme makeover" of political satire, which is now more pointed and "partisan than ever before."

This is a payoff? For whom? Zoglin touted their "fresh perspective on the increasingly vitriolic U.S. political scene." But they are the ones who are increasingly overflowing with infantile vitriol about their opponents being "hemorrhoidal." What's "fresh" about that?

Apparently the "payoff" is the comedians convincing the press to get even nastier with Republicans. Noah told Time: "There's a certain level of naivete when you say Hillary Clinton is worse than Trump. I think that's a very dangerous position to be in. And I think the press has gotten to a place where they are realizing it's about truth and not neutrality."

The comedians and the press must favor "the truth." That's the Clinton side — the lovers of "truth"? Trump's existence is somehow entirely mythical, as Bee contended saying, "News organizations simply are not equipped to cover a candidate whose entire being is a lie."

It gets better, folks.


Of NBC's Meyers, Zoglin claimed that "it is rare, not to say unprecedented, for the host of a mainstream network show to push such a blatant political viewpoint, yet Meyers says NBC is fully on board." Zoglin somehow slept through the precedent of the last two election cycles, where Comcast loaded up Barack Obama's campaign treasury, and NBC added in-kind contributions at the newsrooms and entertainment studios. In 2012, which NBC comedian mocked Obama? And which NBC comedian didn't mock GOP nominee Mitt Romney?

Obama knew he could show up at Comedy Central with that "nonpartisan" Stewart slobbering at his feet, in awe.

The "satire" spared the Democrats never seems to come up. Zoglin briefly mentioned that Hillary Clinton "gets her share of jabs," but he couldn't be bothered to quote one, while he eagerly shared anti-Trump insults, like Bee's calling him a "sociopathic 70-year-old toddler."

He didn't mention how Meyers lectured grumpy Bernie backers at Democrat convention time: "We're on the cusp of electing a racist demagogue, and that never ends well. I don't know which class you ditched to go to those Bernie rallies, but I have a feeling it was history." By way of contrast, Kimmel offered his show to Clinton by letting her open a jar of pickles on stage to mock those who question her healthiness.

The network comedians are pressuring the network "news" to abandon any pretense of fairness and use the full force of their propaganda power to tar and feather Trump. It's working.