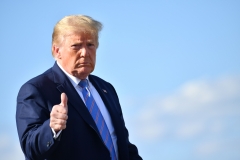 President Donald Trump has an opportunity to secure his legacy with regard to Iran. It is an opportunity to put the U.S. on the moral high ground, encourage millions of Iranians who have been suffering under the ayatollahs’ yoke, and send a shiver down the spine of the tyrants ruling Iran. And this can be done without costing American taxpayers a penny and without any further sanctions.

Trump only needs to demand an independent investigation by the United Nations into the massacre of some 30,000 political prisoners in Iran. There is a solid basis for such an investigation since much is already known about the circumstances of the massacre. It stemmed from a desire to eliminate all political prisoners after Ayatollah Khomeini accepted a ceasefire with Iraq in July 1988, describing it as drinking a “chalice of poison.”

In a fatwa, Khomeini decreed that persistent support for the Iranian Resistance should be punished without mercy or leniency. It also established “Death Commissions” comprised of three individuals. A representative of the Ministry of Intelligence, a religious judge, and a prosecutor decided the fate of the prisoners in trials that lasted only a few minutes. The resulting executions were carried out secretly and the victims were buried in mass graves.

The majority of those executed were serving prison sentences for their political activities. Some had previously been imprisoned and released but were again arrested and executed during the massacre. Approximately 30,000 people were executed over the course of several months, most of whom were affiliated with the People’s Mojahedin Organization of Iran, which was then and still remains the country’s leading voice for democracy.

For most of the 32 years since those killings, the Iranian regime kept a veil of silence over this moment in history, criminalizing public references to it while also working to cover up vital evidence. And as part of the failed appeasement policy, the West failed to address a massacre that many jurists have described as the worst crime against humanity in the second half of the 20th century. Though the UN has always been entrusted with preventing or at least investigating such a crime, it has never investigated the massacre.

Iranian dissidents will try to highlight these failings in an online conference on Aug. 22: “Executions, Means to the Mullahs’ Survival -- Call on UN for the 1988 Massacre Accountability.” They will point out that the 1988 massacre is not merely part of history but is intertwined with the fabric of the Islamic Republic.

When anti-regime protests spread across the country in November, Supreme Leader Khamenei ordered the Islamic Revolutionary Guard Corps to open fire on protesters, killing approximately 1,500. Making matters worse, the Iranian judiciary has handed down death sentences for several individuals who were arrested on the basis of their participation in the uprising. The commitment to an ongoing crackdown raises concerns about a repeat of the several months’ killings that comprised the 1988 massacre.

But there are signs that after three decades, change might be under way with the leadership of the Trump administration. On July 17, State Department spokesperson Morgan Ortagus issued a statement that identified the Death Commissions by name while highlighting the “persistent violation of human rights” being carried out by the Iranian judiciary.

She went on to say “the United States calls on the international community to conduct independent investigations and to provide accountability and justice for the victims” of such abuses. Those investigations would presumably take aim at the Death Commissions, as well as the regime’s more recent perpetrators of crimes against humanity.

Some Western politicians have already set their sights on introducing the massacre and the need for an independent UN investigation as topics of debate in the UN General Assembly this fall. Ortagus’ statement may provide significant additional encouragement. The international body is already scheduled to deliberate on a censure resolution on Iran’s egregious human rights record. It shouldn’t be difficult to demand an independent investigation into the 1988 massacre.

After more than 30 years of relative silence, this would be a vital challenge to the Iranian regime’s sense of impunity. And unlike the various private reproaches that have been issued in recent years, a debate at the UN could very well lead to serious, multilateral action, including a UN-led independent investigation and ultimately the filing of charges against Death Commission members at the International Criminal Court.

The U.S. can play a leading role in this. Doing so would be beneficial for President Trump himself, but also for America’s standing in the world, and for the Iranian people who have waited more than three decades for the day when justice prevails.

Ken Blackwell is on the Advisory Board of Trump-Pence 2020. He is the former U.S. Ambassador to the United Nations Human Rights Commission.