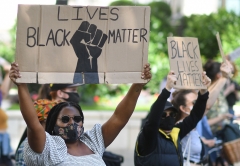 The supposed popularity of “Black Lives Matter, Inc.” is a complete fantasy — willfully repeated ad nauseam by the left and the media — that is distorting public discourse around the wave of radicalism that has ravaged our cities this summer.

Mainstream polls ostensibly show striking levels of “support” for Black Lives Matter (BLM) — up to 63 percent of respondents in one recent survey. In another poll, 60 percent said they support the “ideas of the Black Lives Matter movement.”

Predictably, the liberal press have hailed these surveys as proof of a massive shift in public opinion since the first wave of BLM activism in 2014 and 2015. Some go as far as to interpret these numbers as public support for the “mostly peaceful protesters” attacking public monuments and assaulting police. Joe Biden’s handlers see it as a mandate to go all-in on a racially divisive, anti-police campaign strategy.

There’s one problem: the entire premise is nonsense.

Further polling makes perfectly clear that many of the people who tell pollsters they "support black lives matter" have no idea what they’re saying. Americans, like all civilized people, believe that black people have a right not to be killed. In the extraordinarily rare circumstances when police officers unjustifiably kill black Americans, the public has always believed that the victims’ lives matter.

But that’s not really what “Black Lives Matter” — a for-profit organization founded by Marxists and funded by an outfit with a convicted domestic terrorist on the board — stands for. That’s not what the wider assortment of street radicals waving the “black lives matter” banner stand for, either.

When you ask Americans about the things BLM does stand for, you get a picture very different from the glowing support they now claim. Only 15 percent of respondents in a recent Gallup poll want to scrap the police. A Pew survey indicated that more Americans supported increasing funding to the police than supported decreasing funding to the institution. Those are central aims of the BLM protests — so much so that when Washington, D.C. Mayor Muriel Bowser had city workers paint a “Black Lives Matter” mural near the White House to show her support for the movement, activists quickly added “defund the police” and chastised her for leaving that out in the first place.

The same phenomenon is evident with respect to other central BLM goals. Only one in five Americans, for instance, believe in handing out reparations to the descendants of slaves, another core BLM aim. And no pollsters — to my knowledge — have even bothered asking about BLM’s even more absurd positions, such as a guaranteed minimum income only for blacks, ending prisons, abolishing private schools, and dismantling the nuclear family.

The biggest problem with this stark disparity between perception and reality is that Joe Biden is trying to exploit it for political gain. He and his campaign are trying to keep the dissonance and division going as long as possible, parroting the “popular” black lives matter slogan and then shrinking into denials and reproachment every time it would actually be necessary to take a stand for any of the ludicrous policy proposals hiding behind it — even to the point of having the media cover for him when he steps over the line into supporting proposals that BLM actually advocates, such as defunding the police.

It’s a cynical ploy to cast President Trump as out of step when, in fact, a large chunk of Americans believe that, if anything, President Trump has not gone far enough in cracking down on the violent protests and riots.

They say there are lies, damn lies, and statistics. The notion of an overwhelmingly popular BLM movement is nothing but a statistic being peddled by professional liars.

Ken Blackwell, an advisor to the Family Research Council, is a member of the Policy Board of the American Constitutional Rights Union. He is the former mayor of Cincinnati, Ohio.