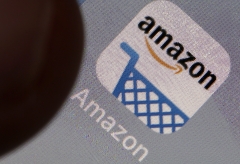 Once again, Amazon has shown it’s on the side of leftist activists, not free speech.

Matt Walsh, a popular conservative podcast host and writer at The Daily Wire, just released a children’s book titled “Johnny the Walrus.” The book, according to the description on Amazon, tells the tale of Johnny, who likes to pretend to be a dinosaur or a knight.

But one day “when the Internet people find out Johnny likes to make-believe, he’s forced to make a decision between the little boy he is and the things he pretends to be — and he’s not allowed to change his mind,” states the description.

According to Walsh, his picture book has been removed from the category of children’s books and moved to political books. Ads for the book on Amazon also have been rejected by the tech giant as not being “appropriate for all audiences” — an umbrella term for standards that ban advertising for books promoting incest and pedophilia, among other things.

Amazon did not response to The Daily Signal’s emailed request for comment.

Amazon has pulled all ads for Johnny The Walrus, claiming it's not "appropriate." They've also removed it from the children's category and labeled it political commentary. They can't take the book down because it doesn't violate their rules, so instead they'll pull these tricks. pic.twitter.com/bThYE3CDd9

Despite all this, Walsh’s book is soaring on Amazon, becoming No. 1 in books Wednesday.

We did it. Amazon is actively trying to suppress my children’s book but in spite of that Johnny The Walrus is now the number one best selling book on all of Amazon. This is causing unimaginable trauma to Amazon’s woke employees and I couldn’t be happier. Thank you, everyone! pic.twitter.com/G9g1BwCDLq

This isn’t the first time Amazon has targeted conservative books. Last year, Amazon blocked ads for the new book “BLM: The Making of a New Marxist Revolution,” by Heritage Foundation senior fellow Mike Gonzalez, a former Wall Street Journal reporter and editor. (The Daily Signal is the news outlet of The Heritage Foundation, which attempted to purchase the ads.)

After The Daily Signal reported on its actions against the Gonzalez book, Amazon reversed its decision and claimed the ads initially were blocked due to “inaccurately enforced” policies.

And just like every other Big Tech company, Amazon never seems to censor or block leftists. Nor does it treat leftist books as too political to be classified as children’s books.

1. “Jacob’s Room to Choose,” by Sarah and Ian Hoffman, is a picture book about Jacob, who likes to wear dresses and gets kicked out of the boys’ bathroom, and his friend Sophie, who has a similar experience in the girls’ bathroom.  “When their teacher finds out what happened, Jacob and Sophie, with the support [of] administration, lead change at their school as everyone discovers the many forms of gender expression and how to treat each other with respect,” states the description on Amazon.

2. “Antiracist Baby,” a board book by “How to Be an Antiracist” author Ibram X. Kendi, who champions critical race theory.

3. “I Am Jazz,” by Jessica Herthel, is a picture book that tells the story of TV personality Jazz Jennings. “From the time she was two years old, Jazz knew that she had a girl’s brain in a boy’s body,” states the description on Amazon, which adds that ultimately a doctor “said that Jazz was transgender and that she was born that way.”

4. “Jack (Not Jackie)” by Erica Silverman is about Susan, who realizes that her little sister “doesn’t like dresses or fairies - she likes ties and bugs!” The Amazon description continues, “Will she and her family be able to accept that Jackie identifies more as ‘Jack’?” and notes: “This book is published in partnership with GLAAD to accelerate LGBTQ inclusivity and acceptance.”

I could go on — there’s a shockingly robust selection of propaganda books for little leftists — but you get the point. On Amazon, it’s OK for people with the “right” views to write about gender identity for kids. But it’s not OK for Walsh, just because the views he holds aren’t seen as acceptable.

“‘Johnny the Walrus’ is a bit of a problematic book — not a bit — it is not a bit of a problem, it’s one hell of a problem,” states a man who appears to be the meeting host. He adds at another point, “I also saw someone mention that this is really tough content and if you’re transgender, if you’re gender nonbinary…and this is super triggering…I would understand if you needed to leave.”

Amazon leadership held a session for employees dealing with the “trauma” of Matt Walsh’s book becoming a best seller and dealing with his trolling. They strategize on how to demote it on their site and claim he will get people killed. @MattWalshBlog broke them. pic.twitter.com/AKH8ihO0iV

More from the Amazon therapy session for trauma from Matt Walsh’s books: They accuse Matt of hate speech and the host literally breaks down in tears. Attendees are warned “brace yourself” before a clip of Matt reading his book is played. We are living in different realities. pic.twitter.com/naxlcG7RvD

Amazon did not respond to The Daily Signal’s email requesting comment on the videos.

It’s clear that Amazon is not committed to a level playing field for all books, regardless of ideology. Once again, another Big Tech company is making clear that there’s one set of rules for leftists and another set for conservatives.