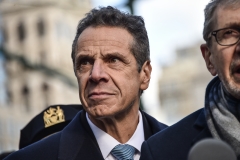 After a year where Emmy award-winning New York governor Andrew Cuomo was regularly touted as the antithesis of government failure, the dam of protection saving his image appears to have fractured beyond repair.

This setback has put the governor on the defensive at a time when he's also in damage control over his egregious cover-up of state nursing home deaths, many of which stemmed from him directing the facilities to accept patients with COVID-19.

While this new attention to what appears to be his abuse of power is a positive thing, let's not skip past the fact it shouldn't have taken this long to address. Even his Emmy award-winning year was filled with noticeable failures.

Before he got in the crosshairs of the #MeToo Movement, Cuomo managed to escape severe political consequences despite allegedly threatening state assemblyman Ron Kim to keep quiet over the nursing home scandal with words that would have likely forced one of his staffers to immediately resign if the shoe was on the other foot (as the Biden administration’s press team recently demonstrated).

Cuomo’s explanation for multiple senior health officials quitting during the greatest health crisis in a century — that those career public servants couldn't rise to the moment like him — has also passed without damage so far. If a New York Times piece on his administration is to be believed, his bullying and intimidation culture was likely the real culprit — yet all we heard was crickets from the media up until this point.

How about the massive ventilator shortage that put scores of New York residents in harm’s way? Despite the governor's office knowing the state was unprepared for a rise in ventilator usage for the entirety of his administration (evidence puts the state's awareness back as early as 2007), Cuomo punted blame to a host of others to cover his own failure when the statewide panic set in.

He then tried to use SpaceX and Tesla CEO Elon Musk as an escape-hatch but was again thrust into damage control once it became clear that hospitals had received BiPAP machines rather than full-blown ventilators. They tried to put a positive spin on it, with the promise of ventilator production at Musk's Buffalo solar panel plant being a way to make up for the shortfall, but of course, that didn't work out either.

It's fitting that the Emmy Award-winning governor bet all his state’s eggs on the grandstanding of a billionaire that enjoys the spotlight and media attention as much as he does, but did he really expect Musk, who has seemed to break promise after promise on the national scale, to get the job done?

In any other state, Cuomo’s misfire in these situations would have been enough to tank an administration. But up until this point, the media has been too afraid to tie this administration's failure to the governor himself. Whether it was ventilators, crony spending, or corrupt cover-ups, Andrew Cuomo's strategy of blaming others has been endorsed and perpetuated by journalists entrusted by the public to uncover the truth.

I have to believe there is some level of political bias to this phenomenon.

Few in the media have pointed to the hypocrisy of blasting Florida Republican Ron DeSantis for doing the opposite of Cuomo — protecting nursing homes by barring hospitals from discharging sick patients. The media were just as happy to skewer then- Michigan Governor Rick Snyder's handling of a legionnaire outbreak in the city of Flint (some still call for his arrest). Yet, when a similar event happened in New York, all the press cared about was covering Cuomo's feud with Bill DeBlasio (more people died from the New York debacle than did in Flint).

That the media praised this man up until this point is a testament to the grip of power he holds over news outlets. Only now, with sexual harassment at play and a pile of dead seniors at his feet, are we seeing any "courage" in the world of mainstream journalism.

It's an absolute disgrace.

For the betterment of New York and its people, Andrew Cuomo’s feet need to be held to the fire, and the press must finally begin holding him and his fellow Democrats to the same standard that they hold Republicans. Only then will the American people’s interests become adequately represented and protected.

Julio Rivera is the Editorial Director for Reactionary Times and a regular guest on cable news.