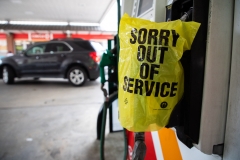 An "Out Of Service" bag covers a gas pump as cars continue lining up for the chance to fill their gas tanks at a Circle K near uptown Charlotte, NC on May 11, 2021 following a ransomware attack that shut down the Colonial Pipeline. (Photo credit: LOGAN CYRUS/AFP via Getty Images)

The Biden Administration just suffered through another week of unmitigated embarrassment on a global scale.

First, there was Biden’s “Build Back Better” economic plan that was exposed as yet another monumental failure. The administration was eagerly expecting a report showing over 1 million new jobs, but the actual number was only around a measly 266k.

However, in addition to almost all conservatives, even most moderates expected there to be some kind of economic penalty in electing Joe Biden last November. What those moderates probably didn’t expect was for America to become so incredibly unsafe in less than 4 months.

This happened in so many obvious ways, beginning with the southern border. Two months ago, the head of the Department of Homeland Security (DHS), Alejandro Mayorkas, had to admit that America would see more illegal aliens at the southern border than during any time in the last two decades. What Mayorkas and most other Democrats fail to acknowledge is the fact that a large percentage of those individuals are drug dealers, gang members, or other criminal elements that are attempting to blend in with legitimate asylum seekers.

So, with it being well-established that America’s literal borders are being weakly monitored, a message has been sent to the world’s hack-for-profit underground that America has never been more vulnerable as she is at this very moment in history.

This most recent attack occurred in the wake of the Justice Department starting a 120-day review of critical cybersecurity threats last week. The DOJ initiative was confirmed in late April by Deputy Attorney General Lisa Monaco at the Munich Cyber Security Conference.

“We are launching this week, under my direction, a review of how the department is looking at exactly this set of challenges,” Monaco said in online remarks at the conference. “We want to bring forth actionable recommendations in a 120-day time frame...on what can we be doing better, working with our partners across borders, to address these threats.”

The focus of this landmark review is said to center around the Chinese and Russian threats in the cybersphere, attacks against cryptocurrency, and supply chain attacks like the earthshaking SolarWinds incident.

Regarding the cryptocurrency issue, with the rise in its popularity, many new malware types have been created by enterprising hackers looking to harness computing power to mine digital currency.

But it doesn’t stop there, as a new trend has seen cybercriminals bypass simple mining for cryptocurrency, and go as far as to penetrate cryptocurrency holders' digital wallets, or swipe funds briefly held on computer clipboards.

All this is occurring as the Cybersecurity and Infrastructure Security Agency (CISA) awaits the eventual confirmation of its latest nominee to the Agency, Jen Easterly, a former counterterrorism official at the National Security Agency (NSA).

Easterly’s time with Obama’s NSA was marred by a multitude of foreign cyber-attacks. In particular, a 2015 report indicated that a secret NSA map noted approximately “600 corporate, private or government victims of Chinese Cyber Espionage that were attacked over a five-year period.” This included breaches within “all sectors of the U.S economy, including major firms like Google and Lockheed Martin, as well as the U.S. government and military,” according to NBC News.

Despite some close allies including the UK’s National Cyber Security Centre (NCSC) working with CISA and the FBI on a new advisory regarding Russian threats, the issue of both Russian and Chinese cybersecurity attacks remains a concern. It was just a couple of years ago that reports surfaced of mutual attacks between the U.S. and Russia against power grid and energy sector targets, while it has been known for quite longer that cyber-attacks have cost Americans hundreds of billions annually.

As scary as these threats against major infrastructure may sound, even everyday citizens are more vulnerable today, as over the last year, macOS users, who for so long assumed that their computers were immune to viruses, have seen a sharp rise Mac Malware.

If this losing trend continues for the Biden Administration, Americans can expect nothing short of agony during the more than three-and-a-half years we still have left with “Sleepy Joe” and company.

Julio Rivera is a business and political strategist, the Editorial Director for Reactionary Times, and a political commentator and columnist. His writing, which is focused on cybersecurity and politics, has been published by websites including Newsmax, Townhall, American Thinker and BizPacReview.