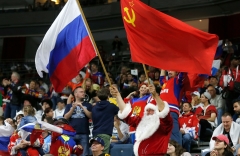 A supporter of Russia dressed as "Ded Moroz" (Father christmas) waves the Russian and the Soviet Union flag during the IIHF Ice Hockey World Championships third place match between Russia and Finland in Cologne, western Germany on May 21, 2017. (Photo credit: INA FASSBENDER/AFP via Getty Images)

With Russia launching a military invasion of Ukraine on Thursday, the corporate press has grown shrill in its calls for punishing Russia with draconian sanctions, supplying Ukraine with increased military aid, and diplomatically isolating the Eurasian power as much as possible. The two-minutes hate against Russia has been cranked up to 11, thereby making any nuanced analysis of why the conflict between Russia and Ukraine has reached such a point almost impossible.

The failure of policy wonks to understand why Russia took decisive action against Ukraine is emblematic of a flawed grand strategy that has dominated D.C. foreign policy circles since the end of the Cold War. Once the dust settled from the Soviet Union’s collapse, international relations specialists were convinced that the U.S. had entered an “end of history” moment where liberal democracy would become the governing standard worldwide. Former Soviet Union (FSU) states would be the preliminary trial ground for this new liberal democratic project.

Through expanding the reach of the North Atlantic Treaty Organization (NATO) into FSU states and the use of color revolutions in this region, Washington believed that it could reshape this part of the world in its image. From dealing with violent insurgencies in the Caucasus to confronting precipitous declines in life expectancy and other social ills such as rising criminal activity, the Soviet Union’s successor in the Russian Federation was in no shape to resist American influence, let alone project power within its backyard during the 1990s.

It’s small wonder why NATO was able to easily intervene in the Balkans, a region featuring ethnic groups like Serbians who have traditionally been allies of the Russians, at a time when Russia was in a wobbly state. Nevertheless, avid students of Russian history such as George Kennan, the author of the "Long Telegram" and America’s containment policy towards the Soviet Union, recognized that the Russian bear was down but not out. During the 1990s, the renowned diplomat warned about the dangers of NATO expansion following the Soviet Union’s dissolution. Despite Kennan’s admonitions, the D.C. political class was drunk on the notion that the U.S. would remain unipolar and be able to impose its universalist vision across the globe at will.

While the U.S. began throwing its weight around overtly and covertly in the Balkans, Afghanistan, Iraq, Libya, and Syria, Russia gradually reconstituted itself, much to the surprise of American foreign policy wonks. The U.S.-sponsored Rose Revolution and Orange Revolution in Georgia and Ukraine respectively, on top of attempts to add these countries into NATO’s security umbrella served as wake-up calls to the Russian national security establishment. The U.S.’ outwardly benign image then looked more and more like that of a hostile external actor trying to sneak its way into Russia’s historical sphere of influence. Conflict between the two powers would soon become inevitable.

Russia’s concerns are understandable when viewed from a geopolitical lens. The U.S. has its own Monroe Doctrine to keep external actors out of the Western Hemisphere. Exercising such policies are not the exclusive domain of the U.S., however. Once other civilization states grow stronger and revert to their historical levels of prominence, they proceed to reassert themselves in their respective domains. These powers’ principal aim is to expel any undue influence from foreign powers that try to encroach in their traditional sphere of influence.

However, the U.S. has applied the Monroe Doctrine at a global scale treating the whole world as its sphere of influence. American policymakers have done so in complete disregard for the potential costs and blowback that could result from overzealous incursions into great powers’ backyards.

No one here is saying Russia is an angel. In fairness, the Poles and Baltic states have legitimate historical grievances with Russia due to the latter's previous imperial dominion over the former. However, there’s little to suggest that Russia is seconds away from launching a blitzkrieg against Eastern Europe. If the Baltic states and Poland were so worried about Russian aggression, they would consider setting up their own security architecture independent of NATO and even consider building a minimum viable nuclear deterrent.

But tropes of Russia being the second coming of Nazi Germany, with all the attendant tropes of appeasement, are simply lazy analogies with scant historical nuance. There are qualitative differences between those regimes. Moreover, for some in the D.C. blob, the Cold War has not ended. For example, Texas Sen. Ted Cruz called out Vladimir Putin for being “a communist” in May 2021.

However, this characterization of Russia as a home of Soviet-style socialism is an outmoded and inaccurate description of what contemporary Russia looks like. Bryan MacDonald, a journalist whose primary focus is on Russia affairs, pointed out that “Russia has a flat 13% income tax rate” and “tiny social welfare payments” to demonstrate that the Russian economy is not necessarily a full-blown command economy like its Soviet predecessor.

- The KGB disbanded 30 years ago & Putin was later director of its successor, the FSB, for 13 months.
- Under Putin, Russia has a flat 13% income tax rate, tiny social welfare payments & the most extreme financial inequality of any G8 economy. Communist? No. https://t.co/wMu9B6Zk7e

In addition, international relations scholar Artyom Lukin observed that Russia under Putin’s tutelage is “a conservative autocracy resembling the czarist Russian Empire” in how it manages its internal affairs. He cited one instance of a Communist Party activist being hauled before a court for engaging in so-called “hate speech” to demonstrate the Russian government’s unique strain of authoritarianism that is not necessarily a spitting image of the Soviet Union. In a hysteria-filled environment of political discourse, these kinds of nuances fall by the wayside.

Unfortunately, there isn’t much in the way of thoughtful geopolitical analysis occurring these days. It’s going to take a new generation of leaders who are not encumbered by tired political assumptions to change the course of American foreign policy.

The first step is for foreign policy leaders to admit that the 20th century international relations landscape is over and that the U.S.' primary threats are more internal than external in nature.

Sticking to Cold War-era assumptions is a recipe for a sub-optimal foreign policy, which could increase the probability of the U.S. stumbling into a disastrous war of choice. If the initial responses to Russia’s invasion of Ukraine have told us anything, it’s that D.C. still hasn’t learned the error of its ways.