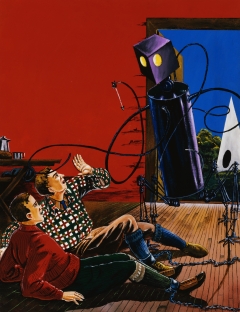 The purpose of a good government is to protect the lives and liberties of its people.

Unfortunately, we have gone so far in the opposite direction from the ideals of a good government that it’s hard to see how this train wreck can be redeemed.

It gets worse by the day.

For instance, despite an outcry by civil liberties groups and concerned citizens alike, in an 8-3 vote on Nov. 29, 2022, the San Francisco Board of Supervisors approved a proposal to allow police to arm robots with deadly weapons for use in emergency situations.

This is how the slippery slope begins.

According to the San Francisco Police Department’s draft policy, “Robots will only be used as a deadly force option when risk of loss of life to members of the public or officers is imminent and outweighs any other force option available to SFPD.”

Yet as investigative journalist Sam Biddle points out, this is “what nearly every security agency says when it asks the public to trust it with an alarming new power: We’ll only use it in emergencies—but we get to decide what’s an emergency.”

A last-minute amendment to the SFPD policy limits the decision-making authority for deploying robots as a deadly force option to high-ranking officers, and only after using alternative force or de-escalation tactics, or concluding they would not be able to subdue the suspect through those alternative means.

In other words, police now have the power to kill with immunity using remote-controlled robots.

These robots, often acquired by local police departments through federal grants and military surplus programs, signal a tipping point in the final shift from a Mayberry style of community policing to a technologically-driven version of law enforcement dominated by artificial intelligence, surveillance, and militarization.

It’s only a matter of time before these killer robots intended for use as a last resort become as common as SWAT teams.

Given the widespread use of these SWAT teams and the eagerness with which police agencies have embraced them, it’s likely those raids number upwards of 120,000 by now.

There are few communities without a SWAT team today.

No longer reserved exclusively for deadly situations, SWAT teams are now increasingly deployed for relatively routine police matters, with some SWAT teams being sent out as much as five times a day. In the state of Maryland alone, 92 percent of 8200 SWAT missions were used to execute search or arrest warrants.

Nationwide, SWAT teams have been employed to address an astonishingly trivial array of nonviolent criminal activity or mere community nuisances: angry dogs, domestic disputes, improper paperwork filed by an orchid farmer, and misdemeanor marijuana possession, to give a brief sampling.

If these raids are becoming increasingly common and widespread, you can chalk it up to the “make-work” philosophy, by which police justify the acquisition of sophisticated military equipment and weapons and then rationalize their frequent use.

Mind you, SWAT teams originated as specialized units that were supposed to be dedicated to defusing extremely sensitive, dangerous situations (that language is almost identical to the language being used to rationalize adding armed robots to local police agencies). They were never meant to be used for routine police work such as serving a warrant.

As the role of paramilitary forces has expanded, however, to include involvement in nondescript police work targeting nonviolent suspects, the mere presence of SWAT units has actually injected a level of danger and violence into police-citizen interactions that was not present as long as these interactions were handled by traditional civilian officers.

Indeed, a study by Princeton University concludes that militarizing police and SWAT teams “provide no detectable benefits in terms of officer safety or violent crime reduction.”

In other words, warrior cops aren’t making us or themselves any safer.

Americans are now eight times more likely to die in a police confrontation than they are to be killed by a terrorist.

The problem, as one reporter rightly concluded, is “not that life has gotten that much more dangerous, it’s that authorities have chosen to respond to even innocent situations as if they were in a warzone.”

How long before these armed, militarized robots, authorized to use lethal force against American citizens, become as commonplace as SWAT teams and just as deadly?

Likewise, how long before mistakes are made, technology gets hacked or goes haywire, robots are deployed based on false or erroneous information, and innocent individuals get killed in the line of fire?

And who will shoulder the blame and the liability for rogue killer robots? Given the government’s track record when it comes to sidestepping accountability for official misconduct through the use of qualified immunity, it’s completely feasible that they’d get a free pass here, too.

In the absence of any federal regulations or guidelines to protect Americans against what could eventually become autonomous robotic SWAT teams equipped with artificial intelligence, surveillance and lethal weapons, “we the people” are left defenseless.

If these killer robots follow the same trajectory as militarized weapons, which, having been deployed to local police agencies as part of the Pentagon’s 1033 recycling program, are turning America into a battlefield, it’s just a matter of time before they become the first line of defense in interactions between police and members of the public.

As Sam Biddle writes for The Intercept, “As with any high-tech toy, the temptation to use advanced technology may surpass whatever institutional guardrails the police have in place.”

There are thousands of police robots across the country, and those numbers are growing exponentially. It won’t take much in the way of weaponry and programming to convert these robots to killer robots, and it’s coming.

There’s a philosophical underpinning to this debate over killer robots that we can’t afford to overlook, and that is the government’s expansion of its power to kill the citizenry.

Although the government was established to protect the inalienable rights to life, liberty and the pursuit of happiness of the American people, it has since come to view “we the people” as collateral damage in its pursuit of absolute power.

As I make clear in my book Battlefield America: The War on the American People and in its fictional counterpart The Erik Blair Diaries, we are at a dangerous crossroads.

By John and Nisha Whitehead