Teens Are Sadder Than Ever. You Can Thank a Crisis of Meaning 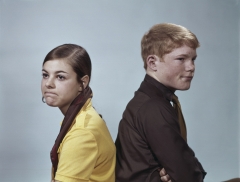 America’s teens are not all right. As Derek Thomas recently wrote in an Atlantic article entitled “Why American Teens are So Sad,”

"From 2009-2021, the share of American high-school students who say they feel 'persistent feelings of sadness or hopelessness' rose from 26 percent to 44 percent, according to a new CDC study. This is the highest level of teenage sadness ever recorded....Almost every measure of mental health is getting worse, for every teenage demographic, and it’s happening all across the country."

What Thomas is describing goes far beyond typical adolescent angst. In fact, according to the National Institutes of Health, other risky behaviors traditionally chalked up to adolescence — such as drinking and driving, fighting at school, and even underage sex — are significantly down. Nor can these declines in mental health be blamed on the pandemic or lockdowns. Rather, these were “pre-existing conditions” that, though certainly aggravated, were not caused by the social chaos of the last two years.

Over a decade ago, psychologist Jean Twenge warned about the effect of smartphones on teenage brains. Since then, the prevalence of social media has unleashed new levels of comparison, exposure, and image problems on a demographic already wired to care too much about what their peers think. Instagram’s own research found that while a third of teenage girls say the app “makes them feel worse,” they cannot keep from logging on.

Even so, argues Thomas,

"the biggest problem with social media might be not social media itself, but rather the activities that it replaces....Compared with their counterparts in the 2000s, today’s teens are less likely to go out with their friends, get their driver’s license, or play youth sports."

And, of course, it also matters what teens are encountering on the screens that are such a big part of their lives. Even more than TV or print media, phones bombard teens with 24/7 coverage of the world’s problems, creating a near-constant sense of fear and foreboding. These days, teens deal with more than just the stress of preparing for college. Alone in their rooms, they are worrying about the pandemic, the war in Ukraine, climate change, and whether they have been sufficiently “woke” on various issues.

In response to all of the social chaos, many parents are choosing what Thomas calls an “accommodative” parenting style. It is very tempting for parents, instead of letting teens experience life’s normal bumps and bruises, to insulate them: “If a girl is afraid of dogs, an ‘accommodation’ would be keeping her away from every friend’s house with a dog, or if a boy won’t eat vegetables, feeding him nothing but turkey loaf for four years” (which, he points out, is a true story).

That strategy, sometimes called “lawnmower parenting,” ultimately backfires. When every challenge on the path is mowed down, a child struggles to develop the resiliency necessary to confront the inevitable obstacles ahead. In the end, a world cannot be prepared for a child. A child needs to be prepared for the world.

Every factor that Thomas identifies certainly contributes to the current mental health crisis among teens. However, there is more to consider.

In his book, "The Content Trap," Bharat Anand tells the story of the 1988 Yellowstone fire, infamously started by a single unextinguished cigarette. But Anand asks a critical question: Why that cigarette? After all, hundreds of cigarettes are dropped in Yellowstone every year. What was different this time?

The answer, he argues, is not found by focusing on the spark — but the environmental factors that turned Yellowstone into a tinderbox. The extremely dry summer of 1988, the driest on record, combined with the park’s controlled burn policy meant, as one former park superintendent put it, “We were a perfect setup to burn.”

Social media, parenting strategies, and world events are definite sparks for a mental health crisis (as are others such as the breakdown of the family and increased availability of substances to abuse), but it’s the prevalent cultural worldview that makes devastating cultural wildfires inevitable.

Our real cultural crisis is a catastrophic, culture-wide loss of meaning. Philosophers warned it was coming, as did social scientists, and now we are living with the existential results of a culture untethered from God, and therefore untethered from any fixed reference point for truth, morality, identity, and meaning. It is a tinderbox in which any spark, whether social media or addiction or lockdowns or something else, is destined to explode.

It is also a tinderbox primed for a different kind of spark, one which can point people again to the God who infused His world with meaning. This spark is Christ-changed people, shaped by redemption, indwelt by the Holy Spirit, and armed with the truth and love about life, the world, and what it all means.