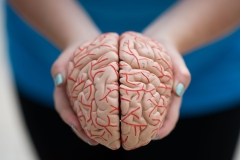 A friend of mine has, for decades now, suffered severe back pain. Finally, surgeons took a remarkable step, implanting a device that sends electrical signals to his spinal cord in order to disrupt pain signals traveling to his brain. For the most part, his pain has been dramatically lessened.

This was an incredible help for my friend. After all, pain tells us that something is wrong. His condition was never going to change, so the pain served no purpose.

The more our knowledge of the human brain increases, the more breakthrough treatments like this, for an increasing variety of mental and physical problems, are possible. Some, such as treating addiction with brain surgery, are more controversial than others.

As WORLD News recently reported, a new study at West Virginia University’s Rockefeller Neuroscience Institute is utilizing deep brain stimulation in an attempt to counteract addictive cravings. Surgeons insert a tiny, thin wire into the brain’s tissue. This allows them to read the parts of the brain that light up when the patient craves a high. It also stimulates other parts of the brain in an attempt to affect, over a time, a “dopamine reset.”

Combined with additional medication, counseling, and lifestyle changes, the treatment seems to have been successful in early trials. More trials are needed before widespread adoption. Even so, as with all technological innovations, any optimism should come with a healthy side dose of caution.

Unlike back pain, addiction involves more than just a person’s neurology. It involves relationships, lifestyle choices, sense of self-worth, spirituality, and identity. To be clear, addiction is not about less than our brain chemistry, but it is about more.

That’s one reason certain addictions, such as opioids, are so difficult to fight or overcome. The chemical forces at work can easily outmatch the human brain. Synthetically produced opioids like fentanyl and carfentanil, for example, pack roughly 50 to 10,000 times the potency of morphine. This partially explains why drug overdoses have skyrocketed in recent years, and why, according to some estimates, more than 90% of those addicted to opioids will relapse.

Illegal opiates killed over 100 thousand Americans between October 2020 and October 2021. The societal and personal damage is incalculable. Finally, certain players in the pharmaceutical industry are facing a cultural reckoning, both on-screen and in court, for the damage they caused.

Given the powerful chemical forces stacked in favor of addiction, it makes sense to enlist science on the side of the human brain. After all, if we can zap our brains out of addictive behavior, why wouldn’t we? The answer is that any theory of treatment that treats the physical and medical side of a person, at the expense of the moral, interpersonal, or spiritual side misunderstands the human person.

Of course, an increasingly dominant form of materialism does exactly that. Faced with complicated problems of human nature, such as poverty, crime, or addiction, it is tempting to grasp for explanations that rob people of moral agency. Poverty, in this view, is the result of generational difficulties, class discrimination, or racial inequities, but never the choices of the people involved. Crime is caused by poverty, or the lack of access to basic social institutions like education. Addiction is genetic, a result of chemical dependence in the brain, and nothing more.

To be clear, empathy, compassion, and care for those in poverty, prison, or addiction are not optional. Christians should know themselves well enough to say, “there but for the grace of God.…” Also, the biblical description of people and sin includes room for both personal and structural factors, both physical and spiritual sides, of each of these issues.

What we cannot do is reduce people down, as a naturalistic worldview tends to do, to only their brains. When we treat them as if they aren’t moral creatures, with the freedom to act, we don’t merely dehumanize them…we fail to adequately help them.

The problem with poverty, especially in the first world, is rarely just a lack of money. This is why a significant percentage of lottery winners end up filing bankruptcy after winning fortunes. People are not reducible to their material selves: their brains, their traits, even their circumstances. Real treatment requires moral commitment and a strong network of spiritual and relational support.

Gerod Buckhalter, an early recipient of deep brain stimulation to overcome addiction, understands this better than most. After his surgery over two years ago, Buckhalter committed to counseling, accountability, and other support systems. He told reporters back in February, “When it comes to staying sober, it’s just as important as the surgery.” If neurostimulation does prove helpful, and I hope it does, it cannot replace a worldview change so that people see themselves as image bearers and moral agents. Neither people nor their addictions are reducible to just one thing.